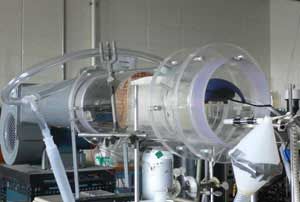 Carbon dioxide traps heat from the sun, and humanity generates roughly 27 billion metric tons of the gas per year. To address concerns regarding global warming, inventors in recent decades have devised carbon dioxide scrubbers that absorb the gas from power plant exhausts, which account for half of all carbon dioxide emissions.

But how technology might take care of the other half—which spews from tailpipes, homes and other sources—remains an open question. Some approaches contemplate modifying the oceans to make them capture the global warming gas.

"The technology to do this is going through major advances, moving toward detailed designs," said environmental engineer Frank Zeman at Columbia University. "It's becoming more and more efficient—we've cut the electricity requirements by well over half."

Zeman is developing technology that forces air through a chamber, where lye—sodium hydroxide—then absorbs carbon dioxide. This carbon-loaded fluid is then mixed with lime to form limestone. The limestone is baked in a kiln to release pure carbon dioxide gas, ready for storage.

Zeman detailed his new device in the Nov. 1 issue of the journal Environmental Science & Technology.

This approach is much like one used in the paper and pulp industry. There, wood is doused with lye to soften it up, and the carbon-loaded fluid is mixed with lime and so on. This method has found use for decades, and could in principle thus be implemented rapidly, Zeman said.

Ideally, such devices would be powered by non-fossil-fuel-burning sources, such as wind or solar power. Still, even if connected with today's power grid, which is often driven by fossil fuels, this technology would capture 100 tons of carbon dioxide for every 20 tons natural gas plants emit or 60 tons coal burners give off. "You would still come out ahead," Zeman told LiveScience.

Given treatment facilities the size of nuclear power plant cooling towers, Zeman estimates 200 towers could tackle the roughly 2.2 billion metric tons of carbon dioxide the United States transportation sector currently emits annually. But even in the long term, such technology would require $100 or more per metric ton of carbon dioxide captured.

So far, carbon credits—that is, permits to emit carbon dioxide—are sold for $5 to $50 worldwide.

"The price on this technology is going to have to come down a lot—or taxes on carbon go way up—before people think about using it," said earth scientist Greg Rau at Lawrence Livermore National Laboratory.

Still, other scientists are working on air capture of carbon dioxide as well. For instance, Columbia University physicist Klaus Lackner, Zeman's former mentor, is working on commercializing such technology, the specific details of which remain private.

In addition, researchers at the Swiss Federal Institute of Technology are developing a technique that uses solar heat to pull carbon dioxide from the compounds they use to absorb the gas from the air. Rau is also in the early stages of researching a method of air capture that relies on electrochemistry instead of solar heat.

One criticism of such work is that it might excuse a lifestyle that furthers global warming. Still, while switching to an economy that runs on hydrogen instead of fossil fuels would cut down carbon dioxide emissions, "you'd have to replace absolutely everything that depended on fossil fuels with something that could handle hydrogen, such as boilers, gas stations and power stations," Zeman said.

A strategy that employs air capture facilities and replaces fossil fuels use with biofuels could allow countries to use their existing fuel infrastructures while reducing carbon dioxide emissions, Zeman said. However, in the end, "obviously the cheapest thing to do is to increase fuel and energy efficiency to reduce emissions," he said. "Air capture may be needed, but it's not the first thing you'd want to do."