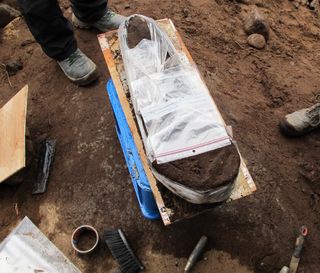 Archaeologists in Norway recently unearthed a Stone Age skeleton and child's skull with bits of what looks like brain still attached. Because the soil was so tightly packed, the arm bone, shown here, was partially dug out, but needs to be fully excavated in the lab.
(Image: © G. Reitan/Museum of Cultural History, University of Oslo)

A Stone Age skull with what may be bits of brain clinging to it has been unearthed at an ancient hunter-gatherer site in Norway.

The skeletal fragment, which is about 8,000 years old, may have once belonged to an infant or a small child, though it is so packed into the soil that researchers still haven't been able to remove most of it, said Gaute Reitan, an archaeologist at the Museum of Cultural History in Oslo, Norway, who is excavating the site in conjunction with the University of Oslo.

The piece of skull was unearthed along with an adult's skeleton. These bones may represent one of the oldest Stone Age skeletons, and skulls, ever unearthed in Scandinavia, Reitan said. [Mummy Melodrama: Top 9 Secrets of Otzi the Iceman]

While doing archaeological exploration last year prior to construction of a convention center in southwestern Oslo, local archaeologists found signs of an ancient settlement and passed the information along to Reitan and his colleagues, who did additional excavation.

Several pits contained microblades, or tiny pieces of flint that would have fit into slots in bone or wooden arrows, as well as stone axes and pieces of rock crystal — a smooth, clear glass that Mesolithic people placed in their arrowheads, Reitan said.

These pieces shaped by the Mesolithic people "look like the cleanest glass from a bottle of Coke," Reitan said.

Other pits revealed hearths with burnt bones, as well as postholes that would have supported the wooden beams of a simple hut.

The finds suggest that the site was once a semipermanent hunter-gatherer settlement.

Though the ancient humans may have eaten deer and elk, they likely survived mostly on the water's bounty, guiding their log boats or canoes through the Oslo fjord to hunt for marine mammals and fish, Reitan said. "They were first and foremost fisherman," he added.

In late June while excavating the same site, the team uncovered a man-size pit, roughly the shape of a bathtub, with the sides lined with stones. The pit was so tightly packed with sandy soil that it felt like concrete, Reitan said.

The burial contained one mostly intact skeleton, possibly from an adult male.

In that same pit, the team also found a fragment of what looked like the back of a child's skull, with bits of spongy, claylike "gray matter," clinging to it, Reitan said. Though it's still too early to say for sure, Reitan told Live Science he "can't think of anything else [it could be] but brain matter."

The burial also contained what look like deer antlers. Throughout the world, hunter-gatherers have placed deer antlers in the burials of loved ones, though the exact reason why has remained a mystery, Reitan said.

The discovery of the skeleton and skull may be among the oldest Stone Age skeletons in Scandinavia. The details of the burial — such as the wide, deeply dug pit and the potential deer antlers placed in the grave — resemble those of other Mesolithic sites from the region, he said.

"They shared much of the same religious beliefs and shared the same way of handling their dead," Reitan said. The concern and effort taken to dig a pit and leave goods for the deceased show the hints of ancient religious beliefs of Mesolithic people, he added.

Still, there is much more to learn about these long-gone hunter-gatherers. Though the archaeologists tentatively identified some of the artifacts buried in the pit, most of the bones are still embedded in clumps of soil. The team now must painstakingly brush and remove the tightly packed soil from around the bones to more thoroughly catalog the pit's contents, Reitan said.

Once they have documented all the bones from the burial, the researchers may conduct chemical and DNA testing on the bones. That testing could, in turn, reveal what the Stone Age fishermen ate, how the man and child (or infant) lived, and how they are related to other ancient people from around Europe.