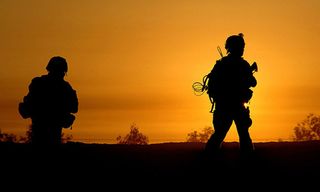 Young military men who are shorter or taller than the average male may have a higher risk for depression than their fellow servicemen, a new study suggests.

Although being shorter or taller than average can have an impact on anyone's self-esteem, this effect may be amplified in the military where physical prowess ranks high in importance, said Valery Krupnik, a clinician at the mental health department of Marine Corps Base Camp Pendleton in California.

"When people find themselves outliers for reasons beyond their control, like physical attributes, they face a challenge in addition to all the challenges average people face," Krupnik told Live Science. In the military, these challenges — which may affect people's psychological well-being — become even more intense, since recognition and progress in the ranks is partly determined by physical attributes, Krupnik said. Military men must "perform," and physical fitness is valued much more highly than in other jobs, Krupnik said.

Along with colleague Mariya Cherkasova, a neuroscientist at McGill University, Krupnik compared the medical records of 169 men in their 20s serving active duty in the military; all the subjects were being treated for varying degrees of depression.

When they compared the shorter and taller groups against the group of men of average height, the researchers found an association between height and increased risk of depression.

The scientists said they suspect that the perception of being shorter affects the psychological well-being of some men, because these men see themselves as physically inferior to others. For tall men, the link to depression seems counterintuitive, since tall height has been associated with attractiveness. However, the researchers write that tall men may have higher expectations for success, and so fall harder into higher rates of depression when they fail.

The findings could help prevent depression for men in certain height ranges, whether tall or short. "The takeaway is for people [with shorter or taller height] to come to terms with their height, with the fact that they cannot change it," Krupnik said, adding that accepting one's height could lead to higher self-esteem.

Some previous studies suggest that mental health problems linked with height manifest before the teen years.

Krupnik also emphasized that the effect of physical attributes on mental health applies to more than just men in the military. "It's not particular to men, height or any other attribute. It's all around. So people who find themselves outliers may want to have an open mind and approach it head on instead of hiding away from it."

The study was limited to men being treated for depression in the military, so it remains uncertain if the findings apply to all men. However, Krupnik said he hopes that future research can be developed to help men of this particular subset avoid depression.