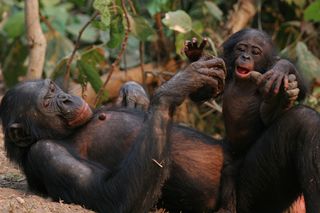 Etumbe and her baby
(Image: © Lola ya Bonobo)

Brian Hare is an associate professor of evolutionary anthropology at Duke University, and Vanessa Woods is the author of "Bonobo Handshake" (Gotham, 20011). Woods and Hare are on the board of the nonprofit Lola ya Bonobo, a sanctuary for orphan bonobos in the Democratic Republic of Congo. The authors contributed this article to Live Science's Expert Voices: Op-Ed & Insights.

"Dawn of the Planet of the Apes " is turning out to be one of the summer's biggest blockbusters. The "Planet of the Apes" movie series has always been about males: Male characters for male audiences, doing stereotypically male things like scheming, maiming and killing. The movie climax involves genetically engineered super-apes on horseback with guns blazing as they mow down the war-mongering humans At first, the 10-year-old boy in me said, "Awesome!" But then I realized that one of the main ape characters — Koba — was actually meant to be a bonobo.

No bonobo  has ever been observed killing another bonobo. Instead of one male being in charge (like Cesar in "Planet of the Apes"), female bonobos work together to make sure that no one bonobo (especially a male) ever dominates all the others. If a male bonobo tries to act like a chimpanzee, he is "corrected" by the females — they'll be very aggressive toward that male, and may even injure him severely if he resists. This aggression is not like chimpanzee aggression, because it is for the purpose of preventing one individual from controlling the group, as opposed to using aggression to monopolize power. Also, while these corrected males are thoroughly humbled, they are never hunted down and killed as male chimpanzees do to their own kind. ['Dawn of the Planet of the Apes': How Actor Embraced Orangutans for Role]

Koba's xenophobic, antisocial and murderous character is the antithesis of real bonobo behavior. The film's explanation for this is that although Koba is a bonobo, he became deranged by human medical experiments. He grew to hate humans and thus actually became the main motivator for the killing of humans in the current movie.

But here's why that explanation doesn't work: I know a real-life version of Koba, and that's not what happened. Deep in the Congo basin, a group of bonobos was released back into the wild. All the bonobos were orphans, taken from their dead mothers to be sold on the black market as pets. I was traveling with Claudine Andre, who is the founder of Lola ya Bonobo, a sanctuary where these orphans were rescued and rehabilitated. As a scientist, I had helped Andre with the release project.

The leader of the group of bonobos was Etumbe. She was an orphan like the rest, but before Claudine was able to rescue her, she had spent two decades in a biomedical laboratory, where she had been used in invasive tests while kept in a squalid, tiny cage. She had a lifetime of reasons to go on a murderous rampage and try to kill off any human she could get her hands on.

As we journeyed up the Congo River to see the bonobos, Etumbe had her new baby on her back, and was holding her son by the hand. She immediately recognized Claudine, and the group celebrated with calls and lots of bonobo handshakes. We spent the day with the bonobos on the beach, cooing over Etumbe's new baby and watching the others play. It was a delight to see them living happy, healthy and free.

When it was time, and we started heading from the forest to our canoe, Etumbe walked toward us in a determined manner. Knowing she was far stronger than all of us, I was a little alarmed at her pace. As each of us passed her to board the canoe, she looked deep into our eyes, took each of our hands one by one and held it in her own, as if to give us a gentle good-bye. As a scientist, I have no idea what she was thinking, but as a person, it was the most heartfelt thank-you I have ever received.

We are not only doing bonobos a disservice by mischaracterizing them as being like all the other apes, but we are handicapping ourselves. Bonobos give us hope that we can find a way to escape our xenophobic and murderous tendencies, even if we are apes like all the rest. Hopefully, in the next "Planet of the Apes" installment, the filmmakers will have the courage to include bonobo females who will be the only ones humane enough to save the planet.

The author's most recent Op-Ed was "Being Gay Is Natural: Just Ask Bonobos." All of the Op-Eds by Brian Hare and Vanessa Woods are available in this archive. The views expressed are those of the author and do not necessarily reflect the views of the publisher. This version of the article was originally published on Live Science.