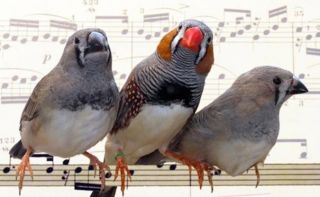 Researchers are decoding birdsong recordings to figure out which birds are making the sounds.
(Image: © Dmitriy Aronov, MIT)

A new method of decoding birdsongs from large sets of recordings may help both expert and amateur bird watchers identify which birds are present, researchers say.

Scientists developed an automated analysis technique and classification algorithm for the birdsongs, and tested it using recordings from the British Library Sound Archive and other online audio collections.

The analysis, described Thursday (July 17) in the journal PeerJ, classifies the kinds of birds producing the songs, and helps identify which birds are "talking" to each other. [10 Amazing Things You Didn't Know About Animals]

"Automatic classification of bird sounds is useful when trying to understand how many, and what type, of birds you might have in one location," study researcher Dan Stowell, a computer scientist at Queen Mary University of London, said in a statement.

By studying birdsong, scientists hope to understand how human language evolved. The automated system makes it easier to build up a large set of evidence to support these studies, Stowell said.

In a public contest with thousands of recordings of more than 500 bird species from Brazil, the new classification system performed the best compared to other audio-only classifiers, and placed second overall out of 10 entries.

Now, the researchers are working on developing ways to transcribe all bird sounds from a recording — "not just who is talking, but when, in response to whom, and what relationships are reflected in the sound, for example who is dominating the conversation," Stowell said.