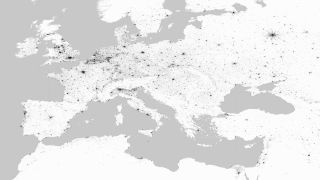 A new global survey of human development finds people have settled more of the Earth than previously estimated, according to researchers with the German Remote Sensing Data Center.

"The number and proportion of human settlements in many areas in the world has been significantly underestimated so far," said Thomas Esch, a scientist with the Remote Sensing Data Center, which is part of the German Aerospace Center.

The survey, called Global Urban Footprints, involved building a giant database of radar imagery from two German satellites: TerraSAR-X and TanDEM-X. This part of the project produced a map of the planet from some 180,000 radar images. [Human Footprints: Tracking Development From Space]

Esch said earlier estimates had human settlements covering between 1 to 3 percent of Earth's surface. But the new radar data, which can pick up more detail than previous studies, found a greater percentage of developed land.

"Even if we are merely talking about a few percentage points, they are of substantial practical relevance if we consider the immense ecological, economic and social impact of settlements, above all the urban conurbations," he said.

Because the project is in its in early stages, the team hasn't put hard numbers on how much of the planet humans have covered. Those numbers will come in the second phase of the project, Esch told Live Science.

Researchers calibrated the radar map to automatically highlight urban structures, such as houses and roads, and remove natural features that may resemble infrastructure, like trees and big rocks.

With the images reduced to three colors — black for urban areas, white for land surface and grey for water — many cities look like paint splatters, or the Rorschach inkblots used as psychological tests.

"These patterns show amazing forms and differences, and it is fascinating to understand that they finally reflect the result of human-nature interaction over the centuries," Esch said in an email interview.

The radar patterns show the influence of nature and cultural history, such as farm towns gridded west of Minneapolis, and villages fanned along the Nile River delta north of Cairo. Other cities spread out like sea stars, such as Germany's capital, Berlin.

In the second phase of the project, the researchers will analyze the data to explore the impact of human development and settlements in both urban and rural landscapes, Esch said. "Urbanization and sprawl of man-made structures have reached a critical dimension," he said.