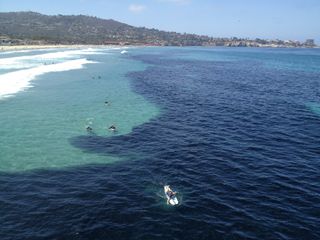 David Checkley studies fish for a living, and even he was at a loss for words when trying to describe swimming with millions of anchovies off the coast of San Diego Tuesday (July 8).

No one knows why the anchovies came so close to shore, Checkley said. The fish typically prefer cool water, and San Diego's surf hit 74 degrees Fahrenheit (23 degrees Celsius). Anchovy eat small zooplankton, and Checkley said it's unlikely they were searching for food close to shore. The sheer size of the group also means the fish would have quickly gobbled through any food, he added. [Photos: The Freakiest-Looking Fish]

"Schools like this exist throughout the region, but I don't know why they butted up right against the surf," he said. "A school this size and this immensity, it's rather difficult to know why."

Checkley, a professor in the integrative oceanography division at the Scripps Institution of Oceanography in La Jolla, California, was one of several Scripps scientists who jumped in the surf and swam with the anchovies on Tuesday.

"I haven't seen this in my 30-odd years here, and it was an opportunity I couldn't pass up," Checkley said.

The surprise schooling also caught the attention of curious surfers, along with seals and sharks, who feasted on the silvery fish.

The Northern anchovy school was the largest group of anchovies ever seen offshore of La Jolla in the last 30 years, as far as scientists can determine. However, researchers with NOAA's Southwest Fisheries Science Center in La Jolla are also checking their archives for pictures of similar surfing anchovies.

The fish swam north by Tuesday evening and have since mostly disappeared.

Anchovies may be making more coastal visits because California's anchovy population, which has been low for the past 20 years, is finally on the rise, thanks to cooling ocean temperatures in the Pacific Ocean. A natural climate phenomenon known as the Pacific Decadal Oscillation is swinging much of the Pacific toward colder temperatures, which the anchovy prefer. "They like a cool regime," Checkley said. "The population is on the way up right now."

In May, a school of anchovies turned up in Southern California's Marina del Ray. But the stopover had tragic results. The anchovies suffocated for lack of oxygen after becoming trapped in the harbor.