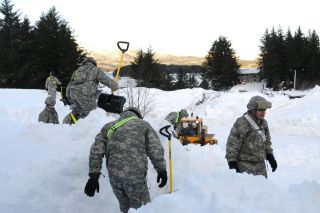 As the rest of the world contends with unusually warm temperatures and scorching drought, Alaska has been bucking the trend since 2000 by reporting some of the coldest winters on record.

Like most of the planet, the state has been heating up steadily over the past century and is frequently cited as one of the fastest-warming areas on the planet, according to the Alaska Dispatch, an online newspaper. The Alaska Climate Research Center at the University of Alaska Fairbanks notes the state was warming at roughly twice the pace as the rest of the planet, particularly from the 1970s into the 1990s, reports the Dispatch.

But since 2000, nearly all the National Weather Service monitoring stations sprinkled across the vast state have reported colder-than-average temperatures. The station at King Salmon on the Alaska Peninsula, for example, experienced an average 4.5 degree Fahrenheit (2.9 degrees Celsius) drop in temperature over the course of the first decade of this century.

The state hasn't become immune to global warming. Instead, researchers blame a climatic phenomenon known as the Pacific Decadal Oscillation. When the PDO is in a positive (warm) phase, a low-pressure center called the Aleutian Low hovers over the state and relatively warm winter winds blow into Alaska from the southwest, according to the National Oceanic and Atmospheric Administration (NOAA).

But when the PDO shifts into a negative (cold) phase, as it does every 20 years or so, it weakens the Aleutian Low and storms from the North Pole blast across Alaska, wreaking havoc on the state's weather, according to NOAA.

As a result, ships were locked out of the Bering Sea this past year by record ice growth, and Alaskans are now shivering in temperatures as low as minus 50 degrees F (minus 46 degrees C). And the outlook for the rest of the winter isn't promising: The National Weather Service has issued a 90-day forecast that calls for lower-than-normal temperatures for the 49th state through the end of March, according to the Alaska Dispatch.

Other areas of the world are also shivering through an unusually frosty winter: Russia is now experiencing its coldest winter since 1938. Temperatures as low as minus 58 degrees F (minus 50 degrees C) and heavy snowfalls have scrambled airline flights, burst pipelines carrying water and heat and closed roads throughout Russia.