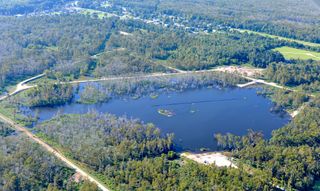 Surges of gas-charged fluid may have explosively generated the earthquakes preceding a giant sinkhole in Louisiana, researchers say.

These findings could lead to a better understanding of how pressurized fluids can trigger earthquakes and tremors, scientists added.

On Aug. 3, 2012, a giant sinkhole formed overnight near Bayou Corne in southeast Louisiana, prompting a declaration of emergency from state officials and evacuation of nearby residents. The sinkhole — filled with a slurry of water, debris and crude oil — swallowed cypress trees, and recent estimates suggest it is now more than 215,000 square feet (20,000 square meters) and about 330 feet (100 m) deep. [Video: Bayou Corne Sinkhole Swallows Trees]

The sinkhole opened up near the western edge of the Napoleonville salt dome. Salt domes are a kind of natural structure caused by the upward flow of salt in the Gulf Coast salt basin; they are commonly mined for salt, and the resulting salt caverns are often used to store hydrocarbons and industrial wastes.

Frequent tremors were reported in the two months before the sinkhole opened. Researchers had suspected the collapse of a plugged-up, abandoned salt cavern underneath the Napoleonville salt dome may have caused these small earthquakes and the sinkhole.

"Mine collapses in Utah have made earthquakes before," said lead study author Avinash Nayak, a seismologist at the University of California, Berkeley.

To find out what might have caused these tremors, scientists analyzed data gathered by a temporary network of seismic stations that the U.S. Geological Survey had set up in the area. The scientists detected 62 tremors — which ranged in magnitude from 1.3 to 1.6 — in the day before the sinkhole was discovered.

Unexpectedly, the scientists found that the tremors originated about 1,540 feet (470 m) beneath the western edge of the Napoleonville salt dome. This area is significantly above and to the west of the salt cavern whose collapse researchers think caused the sinkhole.

Instead, the seismic data suggested that the sinkhole-linked quakes were caused by explosive events similar to volcanic eruptions. While hot magma causes volcanic eruptions, these sinkhole-linked quakes were apparently triggered by high-pressure gushes of either natural gas or water charged with natural gas. Bubbling gas was seen in waters near the area before and after the sinkhole gaped open.

The origin of the natural gas behind the tremors is still uncertain. However, "the salt that ultimately leads to the formation of a salt dome is deposited in shallow seas, and is interbedded with sediments that can be rich in organic matter,"said study co-author Douglas Dreger, a seismologist and geophysicist at the University of California, Berkeley. Over time, "this organic matter becomes oil and gas," he noted.

In the future, "we would like to know if and how the nature of earthquakes has changed after the sinkhole formed," Dreger told Live Science. "We would like to understand more the science behind the role of fluids in being able to cause seismic events." For instance, a 2013 study found that wastewater injected into storage areas deep underground appears to be linked to all the earthquakes in a town in Ohio in 2011.

Nayak and Dreger detailed their findings online July 1 in the journal Bulletin of the Seismological Society of America.