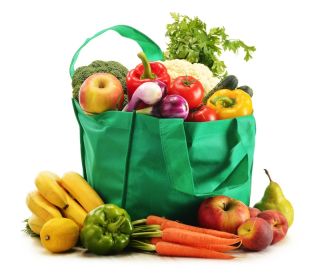 Eating more fruits and vegetables is a generally a good idea, but this alone isn't likely to help you lose weight, a new review of studies suggests.

Researchers analyzed previous research on weight loss and increased fruit and vegetable intake, which included data on more than 1,200 people. The investigators found that eating more fruit and vegetables, without also changing the amount of calories from other food sources, did not cause people to either lose or gain weight.

"Across the board, all studies we reviewed showed a near-zero effect on weight loss," study author Kathryn Kaiser, an instructor at the University of Alabama at Birmingham School of Public Health, said in a statement.

Fruits and vegetables do have calories, and people who want to lose weight should reduce their overall energy intake, the researchers said.

"Fruits and vegetables have many benefits, and we encourage people to include them in their diets," study author David Allison, associate dean for science in the UAB School of Public Health, told Live Science. "Eat all the vegetables and fruit you want, but you have to cut out more calories from other foods," to lose weight, he said. [6 Easy Ways to Eat More Fruits and Vegetables]

Public health authorities often fail to include the latter part of the message about the need to reduce the number of calories consumed, while recommending that people increase their intake of fruits and vegetables, Allen said.

However, the study did not show that the consumption of extra fruit and vegetables caused a weight gain.

"It appears that an increase in servings does not increase weight, which is a good thing for getting more vitamins and fiber in one's diet," Kaiser said.

Laura Jeffers, a registered dietician at the Cleveland Clinic who was not involved with the study, said, "This is a good summary of research that has been done."

Indeed, some of her clients are trying to lose weight and are adding fruits and vegetables to their diets without reducing their calorie intake, she said. If patients realized that this is not likely to work, they would be more successful in reaching their weight-loss goals, she said.

Fruits and vegetables include fiber and macronutrients that are important for health, she said. However, dieters should remember not to overeat, and they also may want to consider decreasing their overall food portions, she said.