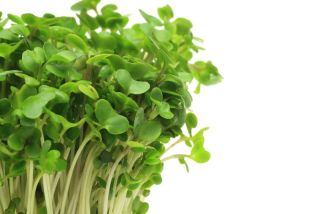 Scientists have concocted a brew made with broccoli sprouts that may help protect against the toxic effects of air pollution.

The study, published in the journal Cancer Prevention Research, made headlines earlier this month. People in the study who drank the mixture, who lived in a rapidly industrializing and polluted region in China, more quickly excreted the cancer-causing chemical benzene from their bodies through their urine.

The news stories about the study, with words such as "detox tea," "body flush" and "pollution solution," might lead you to believe there's something, after all, to those juicing and herbal detox schemes sold though the Internet and hawked by people like Dr. Oz.

Not so, according to the researchers who conducted the China study, who added their finding was a bit oversold in some news reports. [7 Medical Myths Even Doctors Believe]

Rather, their small study showed that broccoli sprouts may help mitigate the toxic effects of a certain class of pollutants on a daily level, acting as a modest shield. The sprouts are no panacea for the ill effects of pollution in general. Nor does the study justify the use of so-called detoxifying juices, herbs and colon- and liver-cleansing schemes to rid the body of harmful chemicals.

In this new study, a team led by Dr. Thomas Kensler, who holds joint positions at Johns Hopkins University in Baltimore and the University of Pittsburgh, tested the effects of broccoli sprouts on 291 adults in a small township near the Chinese city of Qidong, on the north side of the Yangtze River, opposite Shanghai. The residents breathe in benzene and other pollutants from factory and automobile emissions.

Broccoli sprouts are rich in a cancer-fighting phytochemical called glucoraphanin, which Johns Hopkins researchers — including Dr. Paul Talalay, who participated in this latest study with Kensler — discovered in the early 1990s.

Kensler said that broccoli consumption initiates chemical reactions that assemble molecules that attach to benzene compounds, making these benzene compounds more water soluble, and easier to pass through the urine. The same mechanism may work for certain other toxins found in air pollution and cigarette smoke, Kensler said, but not all.

The people in the new study who drank a concentrated tea made with broccoli spouts excreted 61 percent more benzene and 23 percent more acrolein, a lung irritant, compared with a group who drank a placebo beverage.

"We would argue that the decrease in 'internal dose' of benzene of about 60 percent that we measured [places us] in the same ballpark as the decreased external dose, or exposure, in Beijing…during the Beijing Olympics," when the Chinese government temporarily closed polluting power plants, Kensler said.

Because benzene can diffuse through cell membranes and interact with DNA, eliminating it rapidly from the body "is a good thing," Talalay said. The scientists couldn't state, however, whether the speed of benzene excretion seen in the study would have any effect on preventing cancer or heart disease.

Moreover, consuming the broccoli sprouts had no effect on shedding lead, mercury or other toxins locked in bone and fat cells, according to the study.

This gets to the heart of the matter: broccoli sprouts don't detoxify the body. Rather, broccoli's glucoraphanin alters the structure of benzene (which in fact doesn't accumulate for long anyway) so the body excretes it faster, perhaps before it has the chance to interact with cells.

Detox schemes, on the other hand, are based on the premise that the body is full of menacing toxins, and that certain juicing regimens or herbs, consumed periodically, can flush the body of all of these nasties, regardless of their chemical composition or place of storage.

Detox schemes fall into three categories — liver cleansing, colon cleansing and whole body detoxification — and each one is based on flawed science.

The liver, the primary organ to detoxify chemicals, never needs to be cleaned because it doesn't work like the lint filter it's commonly portrayed to be. The liver detoxifies chemicals by changing their composition into a less-reactive state. Chemicals that the liver can't detoxify simply pass through it unchanged, at the risk of harming other organs.

The colon never needs to be cleaned, either. The theory of autointoxication, in which a dirty colon creates toxins that are reabsorbed into the body, was disproved nearly 100 years ago and is now considered quackery. Most practitioners of colonic cleansing are not doctors. In fact, medical doctors consider the practice to be a waste of money and potentially dangerous.

The notion of whole body detox is plagued with ambiguity, and is based on the idea that raw foods, juices and antioxidants can somehow scrub away "toxins" that are never specified. While it is true that the body harbors natural and human-made pollutants, and that these pose uncertain dangers, it's not true that an herb or juice can locate all these diverse chemical families within the body, and safely and magically escort them out of the body. Doctors know of no biological mechanism to enable this.

Detox, in this regard, is more of a marketing concept than a biological one, Talalay said. Yet good health can be maintained, not through periodic detoxification but rather by preventing toxins from taking hold through a healthy diet.

"Evolution isn't smart, but it has a lot of time on its side," Talalay said. "Cells have developed a system to survive." And so although the body isn't completely efficient at warding off toxin-induced disease, what's remarkable, Talalay said, is that vegetables and their phytochemicals can boost the body's ability to protect itself.

This is what the researchers set out to demonstrate in China, with broccoli sprouts. The food can serve as a frugal means to reduce exposure to toxins, Kensler said, akin to a face mask, until systematic pollution controls are applied.