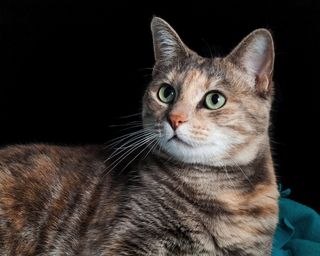 I wouldn't say my cat, Zoe, is from hell — but she is a bit of Dr. Jekyll and Mrs. Hyde. In the mornings, she is very cuddly and affectionate, and there are times that she sleeps right up against my head or neck. But usually, at about 10 p.m., her pupils dilate and she gets zany, racing and leaping around the house like a Howler monkey who just spotted a jaguar . When my wife and I try to pick her up when she's in this kind of mood, she typically responds with something between a love bite and a flesh-tearing chomp.

That's why I was excited to interview Jackson Galaxy, the host of Animal Planet's hit show, My Cat From Hell who spoke recently at the HSUS Animal Care Expo, the largest international education conference on animal care, sheltering, rescue and emergency services. I wanted to ensure Zoe doesn't have Mad Feline Disease. I spoke with Jackson about cat behaviorists, troubleshooting cat problems, community cats and the Animal Care Expo.

PACELLE: A lot of people know about the work of behaviorists or trainers who help with dog issues, but you don't hear as much about experts who work on cat problems. Am I correct in that assumption? GALAXY: You are absolutely correct. As recently as two months before the season one premiere of My Cat From Hell, I was still being asked what a cat behaviorist did. It's been part of my mission to educate people about the "teachability" and the "trainability" of cats. That may sound ridiculous, but whereas folks wouldn't think twice of calling a trainer if the dog chews up the couch, they won't even think of hiring a cat behaviorist if the cat pees on that couch. [10 Amazing Things You Didn't Know about Animals ]

Part of the reason the Jackson Galaxy Foundation is coming into existence is to help lift up cat-loving shelter and rescue workers into positions where they too, can help their organization and then reach out on their own to help the larger community.

In cases where you are called in for a cat problem, what is the most common problem you see?

By and large, it's a pretty even split: litter box issues and aggression. In this day and age, even with the existence of My Cat From Hell, it takes a lot to push a human to call a behaviorist. It's almost as if they are swallowing their pride, admitting that they can't "handle the cat." It seems like when guardians are confronted with either of those behaviors, it brings them to that most irate, most confused, most frustrated place. Of course, part of my job is to address the needs and frustrations of the humans. Education is key, but compassionate education is king.

Given your start at the Boulder Valley Humane Society, what else can local shelters and rescues do to help troubleshoot cat problems and keep cats in their homes?

I love talking about this! To start with, one of the most important pieces of advice I can give to any shelter is to remove the word "random" from their vocabulary when it comes to assessing cat behavior. Minute changes in behavior can signal big changes to come. Encourage volunteers to have a written communication chain with each other and with shelter/rescue staff for each cat in their care. It could mean a few minutes of journaling after each visit. The added bonus, besides heading off behaviors at the pass, is that adopters then have a comprehensive story of who their new companion is. It will help facilitate adoptions and discourage returns.

Another piece of advice I would offer up to adoption counselors handling incoming surrenders: Get the most comprehensive history you can. Every shred of information is vital for people like me. Even if you think the reason for surrender is "trivial" (i.e., allergies or the birth of a baby), remember there was surely a chain of events within which the human-animal bond was damaged to the point of "getting rid of" the animal.

I know you are also passionate about protecting community (feral and stray) cats. Can you tell me a little bit about your thoughts on how society can humanely address the issue of outdoor cats?

You're right. The well-being of feral/community cats is so important to me. When I first started out, it seemed to me that there was no comprehensive game plan from a shelter or community perspective except to catch and kill. That was then. Now the letters TNR [Trap-Neuter-Return] represent a crucial link in the chain that stretches from this once-forgotten population to the shelter/rescue on a managerial level and to the public at large on an awareness level. [Here, Kitty, Kitty: 10 Facts for Cat Lovers ]

Everyone deserves a shot at life. Not every community cat is cold, starving, disease ridden. Are their life spans shorter than indoor housecats? Of course. But through managed colony care and a consistent approach to spaying and neutering, we are proudly proving that we just don't have to kill them. We as animal lovers are now demonstrating our love by committing time and resources, all to save the lives of cats, not only in the shelter and rescue system but on the streets as well. It's an exciting time to be working for Team Community Cat!

I was walking my dog about seven months ago, and found a cat on the street. She was super friendly, so she wasn't hard to scoop up. But sometimes she's a little too friendly. She wants to sleep on my head or my neck. She is constantly play-attacking, especially when I am trying to go to sleep. And she's also fond of biting me and my wife. She doesn't sink her teeth in, but she grabs your cheek, or chin, or arm, so you feel it just enough. Any thoughts on how to get her to cease that behavior?

A disclaimer — I can't diagnose your cat without meeting her and spending time with all of you. That said, it sounds like you picked up a cat who was separated from mom and siblings a little too young. She doesn't know the difference between inhibited play and actual prey, and that leads to her play aggression. One thing that you as well as every guardian out there would want to commit to is vigorous interactive playtime every day (or night, in your case) with your cat. Toys that allow you to mimic air prey and ground prey give us the gift of allowing the inner "raw cat" out to play. That's your job — unleash your cat's mojo! Your ankles, your dog … everyone else will thank you!

Author's Note: You can also watch a video of Wayne Pacelle conducting an interview after Galaxy's talk at Expo.

Pacelle's most recent Op-Ed was "Halting Drone-Assisted Hunting Before It Takes Off." This article was adapted from "Jackson Galaxy and Cats From Other Universes," which first appeared on the HSUS blog A Humane Nation. The views expressed are those of the author and do not necessarily reflect the views of the publisher. This version of the article was originally published on Live Science.