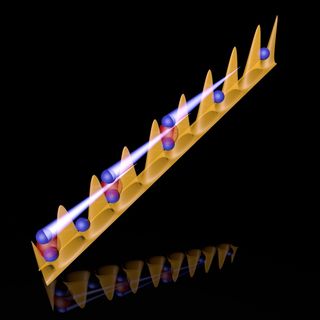 Quantum particles transmit through a whole series of barriers under conditions where a single particle could not do the move.
(Image: © University of Innsbruck)

Almost anything is possible — at least for a subatomic particle.

One of the many mystifying consequences of quantum mechanics — the rules that govern the behavior of tiny subatomic particles — is that individual particles can pass through barriers that would otherwise be impenetrable.

Now, a new study has shown this same quantum tunneling effect can occur over relatively long distances, with particles seeming to shift places even when several other particles stand in the way. In fact, the interactions between the particles seem to help them along. [Twisted Physics: 7 Mind-Blowing Findings]

In classical physics, an object can only go somewhere if it has enough energy to do so. For instance, a ball sitting at the bottom of a hill can't go over the hill unless someone pushes it up with enough energy, said study co-author Hanns-Christoph Nägerl, a physicist at the University of Innsbruck in Austria.

But one consequence of quantum mechanics is that subatomic particles don't have one fixed location until they are measured. Instead, a particle has some likelihood of being in every possible location — the likelihood of it winding up on the other side of the hill without a nudge is very, very small, but it's not zero. Very rarely, a quantum particle can "tunnel" to locations that classical physics would say they couldn't reach.

Though the concept defies most human expectations about the physical world, quantum tunneling actually underlies many fundamental processes in nature. For instance, protons and neutrons can tunnel out of the nucleus of an atom in radioactive decay.

But most well-understood examples of tunneling involve just one particle, and it is often not possible to use theoretical models to predict how multiple particles could interact on the quantum level, Nägerl told Live Science.

Instead, Nägerl and his colleagues decided to create a physical "quantum simulator" that could mimic other quantum systems.

The team cooled cesium atoms to just a bit above a temperature of absolute zero (minus 459.67 degrees Fahrenheit, or minus 273.15 degrees Celsius) and placed the atoms in a virtual lattice created with intersecting beams of high-intensity lasers. The beams created a pattern of bright and dark regions, or an energy landscape, that "looked," to the atoms, like a board covered by rippling peaks and valleys. (The dark regions served as barriers for the atoms.) At such low temperatures, the random jiggling of atoms almost completely stops, leaving no energy for the atoms to move — except using quantum tunneling.

The team then applied a force that slightly shifted the energy landscape — in essence, tilting the board — so that the particles would want to move down the board.

The observation of these resonances over so many lattice sites is new, said Jonathan Simon, a physicist at the University of Chicago who was not involved in the study.

However, "the tunneling process becomes slower and slower the farther the atoms have to hop. This does not bode well for scaling such interaction-shifted tunneling resonances to a larger number of lattice sites," Simon told Live Science. "Fortunately, developing intuition for the quantum dynamics of even five or six particles is already exciting and important."

The findings were reported today (June 12) in the journal Science.