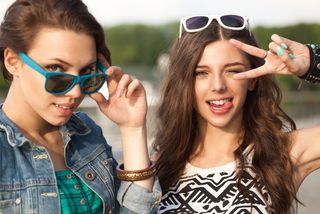 Research has found that individuals who, at 13, acted "old for their age" and hung out with attractive people were deemed to be more popular by their friends compared with other kids.
(Image: © Kaponia Aliaksei | Shutterstock)

The "cool kids" in middle school may not be so cool when they grow up: A new study suggests these once-popular teens are at greater risk for relationship and drug problems in adulthood.

The study researchers followed 184 teens from when they were 13 (in seventh and eighth grade) until they were 23, and asked participants a number of questions about their lives, including whom their close friends were, which peers they thought were popular, and whether they'd used drugs or had a romantic relationship.

At age 13, kids who acted "old for their age" — by making out with other girls/boys, engaging in deviant behavior like sneaking into a movie, and also hanging out with attractive people — were deemed to be more popular by their friends compared with other kids. (People who are attractive, or who try to strive to be more attractive by wearing makeup, etc., may be perceived as more mature, the researchers said.) These cool kids also cared more about being popular than did other teens. [10 Facts Every Parent Should Know About Their Teen's Brain]

But by age 22, these behaviors were linked with declines in popularity, and the former cool kids were perceived as being less competent at managing their relationships or getting along with friends.

The cool kids were also at greater risk for criminal activity and substance use problems at age 21 to 23. In fact, acting old for your age in middle school was a better predictor of drug problems in adulthood than was drug use in middle school.

The researchers stress that behaviors such as having romantic relationships or breaking the rules are common among older teens. But in the early teen years, "these seemingly minor behaviors predict far greater future risk than has heretofore been recognized," the researchers wrote in today's (June 12) issue of the journal Child Development.

The study cannot determine the reason for the findings. But the researchers speculate that teens who try to make friends by acting cool actually end up less socially skilled, because they did not learn more positive ways of interacting with people.

Over time, these teens may also feel they need to turn to more and more extreme behaviors to "impress" friends, which may lead to more serious drug and alcohol use and criminal activity, the researchers said.

The study found an association, and cannot prove that being a "cool kid" causes problems in adulthood. Future research is needed to determine why these behaviors (acting old for your age) develop, and how they could lead to long-term problems, the researchers said.