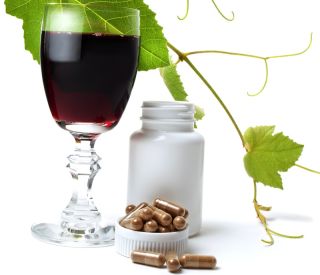 Red wine contains the compound resveratrol, which is also available as a supplement.
(Image: © Wine and resveratrol supplements photo via Shutterstock)

Taking the popular supplement resveratrol during pregnancy may cause abnormalities in the fetus, according to a new study done in primates called Japanese macaques.

Although the study was conducted on animals, the researchers recommend that pregnant women should refrain from taking supplements of resveratrol, a compound that can also be found in red wine, and is touted to have anti-aging and heart-health benefits.

"Our results would suggest, and I would recommend, that women planning on getting pregnant or who are pregnant should not take these resveratrol supplements," study author Dr. Antonio Frias, director of the diabetes and pregnancy program at Oregon Health & Science University Center for Women’s Health and a scientist at OHSU's Oregon National Primate Research Center, told Live Science.

The study researchers set out to test whether taking resveratrol might affect the metabolism of  pregnant female macaques. The researchers used the Resvida brand of the supplement from DSM Nutritional Products in their study, Frias said. They wanted to know whether the supplement could increase the animals' uterine blood flow, and provide metabolic benefits.

They found that the supplement did have some positive effects on the pregnant females, such as an improvement in their metabolism and placental blood flow, as well as reduced placental inflammation. In the fetus, the supplement was linked with decreased fat deposition in the liver, which is a common consequence of the Western-style diet that the female monkeys were fed. [7 Ways Pregnant Women Affect Babies]

However, the supplement also caused abnormalities in the development of the fetal pancreases.

"So all those [effects] together were beneficial, but the unexpected disruption of the fetal pancreatic development was really concerning," Frias said. It is not clear whether the pancreatic abnormalities have affected the health of offspring, because the researchers do not have data to look at this question, he said.

The researchers are not sure exactly how resveratrol negatively affects the macaque fetal pancreas. Previous research has shown that the compound can inhibit the growth of cancer cells, but it is not really clear how it works on a cellular level in this case, Frias said.

"I think it [the new study] strongly suggests the negative effects to these doses of resveratrol supplementation during that vulnerable fetal developmental period, and given the similarities between nonhuman primates and humans in terms of their fetal metabolic development, I think it is really concerning," he added.

Resveratrol can also be found in grapes and nuts, but at much lower levels than in supplements.

"The negative effects were clearly associated with a high level of resveratrol in the supplement," Frias said. A cup of grapes contains less than a milligram of resveratrol, whereas a typical resveratrol supplement pill contains 250 to 500 milligrams of the substance, he said.

As for whether there are any benefits to taking resveratrol supplements, scientific evidence has been scarce.

"There are many human clinical trials ongoing, using resveratrol supplementation for multiple things," Frias said. There is some evidence that resveratrol may help people with metabolic diseases, and the compound is also being studied for effects on cancer and vascular dysfunction.

Previous research on mice has shown that resveratrol may help prevent metabolic syndrome in lab tests. Studies have also demonstrated that the compound may help prevent heart disease. However, a recent study published May 12 in the journal JAMA Internal Medicine showed that diets rich in resveratrol do not reduce deaths, or rates of cardiovascular disease or cancer.

Some experts suggested that findings such as the new ones are just part of the process of testing any supplement.

"We've known for a long time that resveratrol is pharmacologically active, and we're just now really beginning to understand the pros and cons of consuming high concentrations of this substance," said Dr. Gerald Weissmann, editor-in-chief of The FASEB Journal, in which the study was published.

"As we begin to establish a safety profile for resveratrol and other dietary supplements, findings like this should come as no surprise. There are always negative side effects when you eat, drink, take or do too much of anything," Weissmann, who was not involved in the study, said in a statement.

However, other experts are more concerned about resveratrol's potential side effects, especially considering that it is already widely available for people to buy over the counter.

"Just because something is legal doesn't mean that it is safe or it works," Dr. Pieter Cohen, an assistant professor of medicine at Cambridge Health Alliance in Somerville, Massachusetts, told Live Science.

The results of this study are a signal that resveratrol may not be safe, Cohen said. There are currently about 450 supplements on the market that contain resveratrol, he added.

The study was published June 2 in The FASEB.