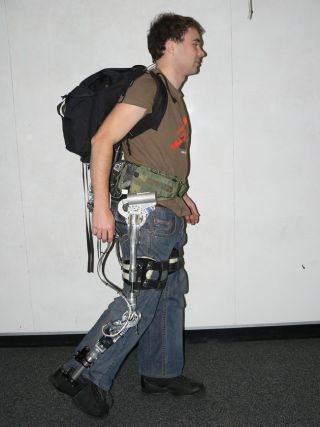 Scientists have created a wearable device that lightens the load for those who carry heavy backpacks—although it makes you walk a little funny.

For a person wearing the machine, known as an exoskeleton, an 80-pound load will feel 80 percent lighter, say the developers at MIT. The secret is an array of tubes that run from the backpack down to the sole of the wearer's shoes, which transfer much of the weight to the ground.

The exoskeleton also has springs located at the ankles and hips, a damping device at the knees and a very small external power input (one watt), all of which helps the machine adapt to a person's walking motion.

This aspect of the exoskeleton still needs some tweaking, though, as the current prototype impedes the wearer's natural walking gait. Researchers found that the person carrying the load needed more oxygen—around 10 percent more—to get around because of the extra work expended to compensate for the gait interference.

"You can definitely tell it's affecting your gait," said Conor Walsh, a graduate student who worked on the project, but "you do feel it taking the load off and you definitely feel less stress on your upper body."

The research team hopes to improve the design so that soldiers and people who travel with heavy equipment can have better mobility.