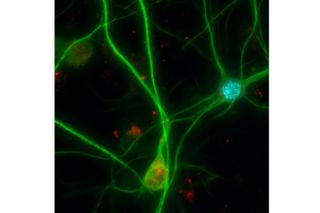 The brain's special abilities entice many engineers to use it as a model for other things they create. In their designs of new control and navigation systems for aircraft, robots and other engineered systems, engineer Silvia Ferrari and her research team at Duke University are emulating the brain's adaptability. They are especially interested in parts of the brain that allow animals to change their movements in response to changing environmental conditions.

One such part is the brain's hippocampus, which is important for the learning and memory that underlies navigation. In the image above, different parts of hippocampal cells are stained for identification. Neurites (green) are long protrusions from neurons that send and receive signals from other cells. The protein histone lysine demethylase (cyan) contributes to the cell life cycle and early brain development. The protein Arc (red) is expressed where the brain is making changes in neural pathways, a phenomenon known as plasticity. Researchers look for markers of plasticity as evidence that changes, such as learning, are happening in the brain. [Delayed Gratification – How the Hippocampus Helps Us Hold Off (Op-Ed )]

Animal brains  respond to their environments and learn from sensory feedback, such as vision, touch and sound, to improve motor performance. Ferrari's group is using brain-inspired computational models, known as spiking neural networks, and designing algorithms that train modeled neural networks to adapt to external feedback. For example, in one test of their algorithm, they modeled a virtual insect controlled by a spiking neural network to navigate an unknown terrain in a search for food.

The researchers are also investigating how well their training algorithm works on living neural networks in petri dishes. If successful, the algorithms could be used in control and navigation systems that are used in a variety of engineered systems that must perform well under shifting conditions, such as robots.