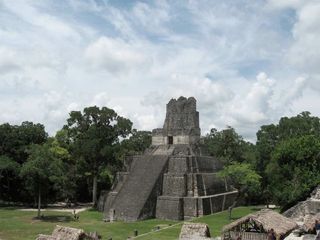 Temple in the Kingdom of Tikal, one of the most prominent of the Classic Period.
(Image: © © Science/AAAS)

Tough and tiny zircon crystals have helped researchers rule out an enormous volcanic blast as the source of ash used to make Maya pottery, deepening this long-running archaeological mystery.

"While we're a little sad not to have solved the mystery, we're really confident we can say the most likely source quite conclusively isn't a match," said lead author Kevin Coffey, a geology master's student at the University of California, Los Angeles.

However, the results did a reveal a tantalizing new pottery puzzle for scientists to solve — whether the Maya's ash came from one volcano or many spewing cones. [Image Gallery: Stunning Mayan Murals]

"Every time I turn another leaf in this thing, it opens up a new problem," said study co-author Anabel Ford, director of the MesoAmerican Research Center at the University of California, Santa Barbara.

Potters at Maya cities on the Caribbean side of Central America fused volcanic ash with local limestone to form household and ceremonial pottery, because the ash made their ceramics easier to fire. The distinctive recipe was a hallmark of the Late Classic Period from A.D. 600 to 900, Ford said.

With thousands of people living in cities such as El Pilar and Tikal, the Mayan potters burned through several tons of volcanic ash every year, Ford has estimated. But no one can figure out where the ash came from.

The mystery begins with the fact that there just aren't any volcanoes in eastern Central America. Nor have archaeologists found evidence the Maya mined ash locally.

They could have hauled in the ash from the many volcanoes in what is today's El Salvador and Guatemala. But the Maya carried loads on their backs, eschewing roads or pack animals, Ford said. She thinks a convenient quarry makes more sense than hauling tons of ash overland every year. However, other archaeologists think a long-distance trade network was possible.

So how about big volcanic explosions? Maybe ash drifted in by air. The new study explores this option.

Under a microscope, the pottery ash looks fresh, with sharp edges, which does suggest the volcanic source was a recent eruption. (In the moist jungle, volcanic ash quickly breaks down.)

Coffey zeroed in on Ilopango volcano in El Salvador as a likely source. A devastating eruption from Ilopango destroyed and buried nearby Mayan cities in the fifth century, similar to Mount Vesuvius and Pompeii, and coated Central America in ash. [Preserved Pompeii: Photos Reveal City in Ash]

Coffey compared zircons from the Ilopango ash to zircons from three El Pilar potsherds. Zircons can survive just about any scorching heat on Earth's surface, from a meteorite impact to a volcanic disaster to a potter's kiln.

But instead of solving the mystery, the researchers' findings ended up eliminating Ilopango from the list of sources.

Nope, not this one either

Zircons in volcanic ash and lava start to crystallize in the underground magma chamber, before the volcano erupts, so some are older than the actual blast. Some of the Ilopango crystals are as young as the eruption, while others are up to 250,000 years old.

The El Pilar potsherd zircons were much older; none were younger than 1 million years old, and one crystal was more than 1 billion years old. These ages present a new riddle for researchers to investigate: Where did this old ash come from? "It's very puzzling, because [the zircons] suggest these are much older volcanic deposits," Coffey said. "It's hard to preserve volcanic ash in the jungle," he added.

Though the researchers tested only a handful of pottery fragments, the chemical signature of the zircon crystals also differs among pots, hinting that the ash came from at least two volcanoes.

"Each time the volcanologists say this will nail it, but we still aren't any closer," Ford said.

A previous study tried to match chemical signatures from the El Pilar potsherds to Mexico's explosive El Chichón volcano, about 233 miles (375 kilometers) away. Instead, the results also ruled out El Chichón.

The UCLA team hopes to test more candidate volcanoes from the Pacific coast, and search for hidden ash deposits on the Yucatan Peninsula. There are 11 potential volcanoes lined up along western Central America. Analyzing more potsherds could also provide new clues to the origin of the ash, Coffey said.

"What we found was pretty surprising," Coffey told Live Science's Our Amazing Planet. "The mystery has gotten all the more mysterious."

The findings were published May 22 in the journal Geology.