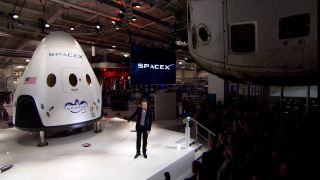 Elon Musk unveils the Dragon V2 space capsule on May 29, 2014, during a press briefing at the SpaceX headquarters in Hawthorne, California.
(Image: © SpaceX, screengrab)

A futuristic ship that brings commercial space taxis one step closer to reality, unveiled last night (May 29), is the latest pioneering idea from inventor and SpaceX founder Elon Musk.

The spacecraft, called Dragon V2, is designed to launch into low Earth orbit and send astronauts to the International Space Station, replacing the pricey ships used in the past. The Dragon V2's sleek design has a retooled heat shield that will withstand multiple re-entries, unlike the disposable vehicles used now. The spacecraft also has retractable legs that allow it to land and take off vertically.

"You'll be able to land anywhere on Earth with the accuracy of a helicopter," Musk said at a news conference held at the SpaceX headquarters in Hawthorne, California, last night. [See Images of the New Dragon Spaceship]

The ship is designed to land, be quickly refueled with propellant and launch again. It also would support up to seven astronauts in space for several days, which could make commercial manned missions more feasible.

The Dragon V2 is just one of many futuristic ideas that Musk has dreamed up. From the Hyperloop transportation system to the Tesla Model S, here are some of the innovator's most visionary — and riskiest — ideas.

The precursor to Dragon V2, Dragon V1, launched its maiden flight in 2010. At the time, only three countries had built spaceships that could enter low Earth orbit. But Musk envisioned a space taxi that was affordable to more than just the ultrawealthy. He poured much of his fortune into founding SpaceX in 2002 to spur commercial spaceflight. The smaller Dragon capsule is less powerful than the latest version and cannot support human passengers, but it has been used to transport cargo to the International Space Station since 2012, at a fraction of the cost of other craft.

Still, Musk wasn't happy that the first version of the Dragon, like conventional launch vehicles, landed using parachutes and would be discarded after delivering supplies.

"As long as we continue to throw away rockets and spacecraft, we will never have true access to space — it will always be incredibly expensive," Musk said at the news conference.

In 2013, Musk unveiled an idea that he claimed would revolutionize rapid transit. The superspeedy Hyperloop, a sleek pod, would shoot passengers from San Francisco to Los Angeles inside a low-pressure tube on a cushion of air, like an air-hockey puck. The capsules would travel at just under the speed of sound, or 760 mph (1,223 km/h), and would depart San Francisco (or Los Angeles) every few minutes. The trip, which now takes more than 6 hours by car, would take about 30 minutes on the Hyperloop. [See Images of the Hyperloop Transportation Concept]

Musk claimed the whole concept could be built for less than the $70 billion that the proposed high-speed train line for the region would cost, but not everyone is convinced that the Hyperloop concept is workable. Because of the incredible speeds reached, the track would have to be incredibly straight to keep slowing friction forces at a minimum. And even if the technical challenges could be overcome, it's not clear whether the costs could be made up by demand for the service, experts have said.

Musk has also been instrumental in developing high-end electric vehicles at his company, Tesla, named after the brilliant inventor Nikola Tesla. The company has developed luxury sedans and sports cars, and plans to unveil a cheaper, $30,000 so-called Bluestar model electric car sometime in the future. The company is also building a series of charging stations throughout the country in hopes of making the car more feasible. Musk has said his goal is to create energy-efficient, sleek cars that are fast, sexy and greenhouse-gas-emissions free. Lowering the price tag on these cars will require a complete reinvention of the battery technology inside, and so far, the company hasn't made a profit.

In October 2013, Musk unveiled an idea straight out of a James Bond film: a submarine car. Musk apparently bought the Bond prop, used in "The Spy Who Loved Me," at auction and planned to turn it into an actual car — a transformable one, that is, according to news reports. The idea is to press a button and have the car, which would be equipped with a Tesla electric powertrain, convert completely into an underwater vehicle, according to CNN. So far, there's been no word on when or whether this idea will leave the dock.

One of Musk's more fantastical ideas is a hyperspeed jet that would travel faster than sound and would take off and land vertically, like a rocket. The inventor mused about the rapid transport system in a video chat in August 2013. Still, lots of people have dreamed up similarly outlandish ideas, and it's not clear whether Musk has any plans to pursue this one more wholeheartedly.