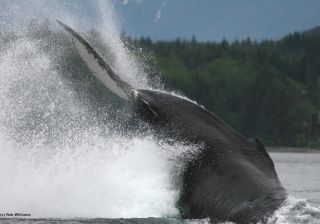 The tail of a humpback whale as it descends into the water.
(Image: © Rob Williams)

Humpback whale populations across the world may actually be separate subspecies, a new genetic study reveals.

Though the expert swimmers make the longest migrations of any mammal, the subpopulations in the North Pacific, North Atlantic and the Southern Hemisphere oceans stick to separate routes.

"Humpback whale populations are actually more isolated from one another than we thought. Their populations appear separated by warm equatorial waters that they rarely cross," study co-author Jennifer Jackson, a researcher with the British Antarctic Survey, said in a statement.

This isolation may explain why the northern swimmers tend to have darker coloring on their underbellies and tails than their southern counterparts. The results suggest the different populations are evolving independently. [In Photos: Tracking Humpback Whales]

As a result, the populations in the three oceans should be classified as distinct subspecies, the researchers found.

Humpback whales (Megaptera novaeangliae) usually feed at high latitudes, then make their way toward the equator to breed — a journey that can cover 3,000 miles (5,000 kilometers). The whales also seem to travel in strikingly straight lines, rarely veering off course by more than 1 degree, though exactly how they accomplish this amazing navigation remains a mystery.

To understand how the different populations were linked, Jackson and colleagues used tiny darts to collect DNA from more than 2,600 whales in five different ocean regions. The team then analyzed the whales' mitochondrial DNA, which is carried in the egg and passed on through the maternal line, as well as DNA found in the nucleus of the cell, which is inherited from both parents.

Because mitochondrial DNA changes more quickly, it provided a snapshot of how the different humpback whale populations migrated and intermingled over the last million years, whereas the more slowly mutating nuclear DNA revealed longer-term trends for the species.

The DNA analysis revealed these populations have kept to themselves for quite a long time.

"Although female whales have crossed from one hemisphere to another at certain times in the last few thousand years, they generally stay in their ocean of birth. This isolation means they have been evolving semi-independently for a long time," Jackson said in a statement.

The new findings could mean some humpback populations are more fragile than scientists had thought. Scientists can't assume dwindling populations in one ocean will be replenished with emigrants from distant oceans.

The study was published today (May 20) in the journal Proceedings of the Royal Society B.