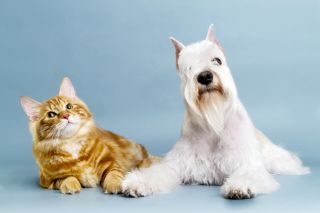 While pet owners may have loads of anecdotal data to show that cats are smarter than dogs or vice versa, there's little scientific evidence to back up those claims.

Simply looking at the structure of the animals' brains only reveals so much about their intelligence.

But some scientists argue that brain size isn't the key to intelligence. The number of neurons between the two species tells a different story.

Within the cerebral cortex — the brain region responsible for information processing, problem-solving and perception, among other things — cats have 300 million neurons, compared with dogs' 160 million neurons.

In recent years, various studies have begun to show just how intelligent dogs are. For instance, canines can sort objects into categories (evidence of abstract thought) and work out what people are thinking, to a degree, an ability called theory of mind.

However, there's a significant lack of studies on feline cognition, which may have to do with the difficulty in working with cats.

In 2009, researchers sought to determine if cats are able to distinguish between different quantities of objects — an ability they previously demonstrated in fish. "I can assure you that it's easier to work with fish than cats," comparative psychologist Christian Agrillo told Slate.

In the end, the research showed that cats can be trained to discriminate quantities, but they don't inherently have the ability like some other animals do.

Another study found (after much difficulty) that cats could follow pointing gestures like dogs, suggesting that they too have rudimentary theory of mind.

The research also showed cats and dogs can solve simple puzzles to get food, but when the puzzle is unsolvable, dogs will look to humans for help, whereas cats will keep trying.

This doesn't ultimately prove dogs are cleverer, just that their significantly longer interaction with humans (they were domesticated at least 20,000 years earlier than cats) grants them better social skills with humans.