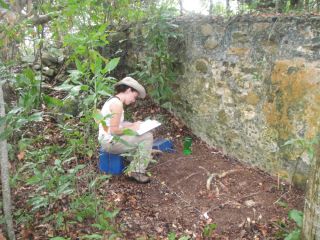 Archaeologist Rachel Cajigas records the top layers of an excavation unit in the British Virign Islands where a plantation house, and buried artifacts, have been discovered.
(Image: © Image courtesy Professor John Chenoweth)

They appear to have been placed there for their spiritual power, protecting the inhabitants against harm, said John Chenoweth, a professor at the University of Michigan-Dearborn, in an interview with Live Science.

The discoveries were made recently in the British Virgin Islands, an overseas territory of the United Kingdom. [Photos Reveal Ancient Pirates of the Caribbean]

On one island archaeologists found "grape shot" — iron balls less than an inch (2 centimeters) in diameter meant to be shot from a cannon — buried in two postholes under a sugar plantation house. At this time on the British Virgin Islands "weapons were in short supply, so these bullets would have been likely relatively important," Chenoweth said. Why someone would bury them in postholes is a mystery, as one would need to dig up the house's foundation to access the iron balls, not to mention the balls would corrode over time, Chenoweth said.

That ammunition likely served a spiritual or magical purpose, he said. Supporting that idea, researchers Jacqueline Simpson and Steve Roud write in the "Dictionary of English Folklore" (Oxford University Press, 2002) that "the power of iron to repel evil is very well attested in Englishfolklore, and throughout Europe — all sorts of domestic objects, and even lumps of scrap iron, were placed in homes, stables and cowsheds as defenses against witchcraft and harmful fairies, or used in counter-spells."

Chenoweth believes that this ammunition was used like a counterspell. Grape shot was intended for warfare and therefore could be magically used to stop violence. "Following the idea of 'like cures like' the grape shot may have beenburied to keep violent attack away," he said in a follow-up email.

The inhabitants of the two-room plantation house had plenty of potential violence to worry about, as historical records show the island government continually warned London the colony was short of weapons and ammunition and was vulnerable to a Spanish attack or slave uprising, Chenoweth said. The fact that the plantation homeowners buried this scarce ammunition makes the find all the more remarkable.

"When they placed them there they had a good reason for doing so," Chenoweth said. [History of Human Aggression: 10 Ways Combat Has Evolved]

The quarters for the plantation slaves have not yet been found.

On another small island, in postholes of another two-room plantation house, Chenoweth's team discovered a whelk shell plugged so that it could be used as a container. Next to it they found fish bones, pins and the bones of a Puerto Rican racer snake.

Chenoweth thinks the shell, which would have held the bones and pins, had a spiritual purpose of sorts. It appears to have been inserted into the foundations around 1740 during a remodeling. Similar objects, called "witch's bottles," have been found at sites in England and America. "It has a long history in England and something that seems to be connected to pre-Christian spiritual practices," he told Live Science.

Objects like these are "seen as an effort to protect the house against bad magic basically, spirits and spells that might seek to harm some of the occupants of the house," Chenoweth said.

Placing the snake bone, which symbolizes something negative, in the shell could have magically canceled out the negative power that the creature represents, he noted.

This plantation was in use from 1720 until about 1780. The slave village is about 150 feet (46 meters) away and would have held no more than 20 slaves. This plantation produced mainly cotton, and, curiously, historical records indicate its owner was a member of the "Religious Society of Friends," also known as Quakers, a group that tended to stay away from rituals and ritual objects.

The two islands are located a few miles from Tortola, the seat of the British Virgin Islands government. The plantations are now part of private property, and the landowners prefer the name of the islands not be released.

The British Virgin Islands are "a beautiful place that many people visit for its culture,arts, and natural environment. I'm hoping that my work can help highlight the unique history of these islands from a plantation past, to freedom, to the modern vibrant society the people of the (British Virgin Islands) have created," Chenoweth said in an email.