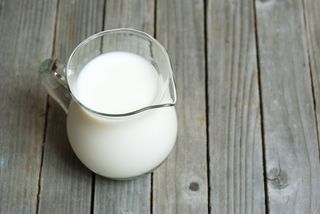 Today, on National Buttermilk Biscuit Day (May 14), people may be wondering, what exactly is buttermilk?

In days of yore, the term buttermilk referred to the tangy residual liquid that remained in a butter churner after the cream had solidified into butter. Tiny specks of creamy butter often flecked the liquid, which had a slightly sour taste.

Like kefir, yogurt, probiotics and other products containing live bacterial cultures, buttermilk reportedly has numerous health benefits, as proponents claim. In addition to being lower in calories and fat than whole milk, buttermilk may help to prevent or alleviate gastrointestinal disorders.

Though some people drink buttermilk straight, cooks also often add it to recipes in place of milk, sour cream or other dairy products. Pancakes, salad dressings, soups, breads and other baked goods — including, of course, biscuits — can be made with buttermilk. Because of its live cultures, buttermilk also lasts longer than regular milk.

Though it won't contain any live bacterial cultures, a tangy version of buttermilk can be made by adding a teaspoon of vinegar or lemon juice to regular milk, then letting the mixture sit for 10 minutes to curdle.