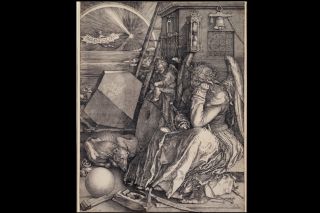 David and Gregory Chudnovsky are distinguished industry professors at the New York University Polytechnic School of Engineering and organizers of a series of scientific lectures on May 17, 2014, inspired by the mathematics of artist Albrecht Dürer. The following day, the Metropolitan Museum of Art hosted lectures on his mysterious, symbol-laden art. The authors contributed this article to Live Science's Expert Voices: Op-Ed & Insights.

This year marks 500 years since the creation of Albrecht Dürer's "Melencolia I," one of his three "Master Prints," widely considered the pinnacle of classical printmaking. Dürer, a Renaissance man, incorporated his world view and his deep interest in science, especially mathematics , into his prints. Among the prints, "Melencolia I" holds a special place, influencing many generations of artists, philosophers, scientists, mathematicians and students of science.

The image of Melancholy, a winged genius with a large book on her lap and an open pair of dividers in her hand, is widely interpreted as a personification of secular learning, with mathematics as a foundation of the natural sciences. This figure, which occupies most of the print, might be an allusion to the ancient problem of expressing the number pi in algebraic form. In 1882, it was proved that such an expression would be impossible.

May 21 was the birthday of this enduring genius, and it provides a unique opportunity to reflect on the modern world's propensity to separate the two cultures of art and science, which seemed to exist in perfect harmony within Dürer.

Dürer was a practicing mathematician. His mathematical writing, ideas and concepts deeply influenced scientists, particularly in northern Europe in the 16th through 18th centuries. His direct influence still can be found in the works, references and personal experiences of modern scientists.

The images in "Melencolia I" are still being scrutinized. The unusual "Dürer's polyhedron" in the center left of the engraving became particularly relevant in the late 20th century in applied sciences and mathematics (in relation to quasi crystals, whose shapes are never exactly repeated and were discovered by Nobel laureate Dan Shechtman). [Mathematics is the Pursuit of Beauty ]

Dürer's view of 3D solids was a departure from the classical Greek approach, and was one of his key influences on scientists and mathematicians, particularly Johannes Kepler (1571-1630), who was seeking a method to pack spheres in the densest way possible.

The early years of the 21st century saw remarkable progress in solving the last outstanding problems in 3D geometry and 3D topology. The most remarkable achievement was the solution of Kepler's conjecture on the densest sphere packing in 3D space. This conjecture, outstanding since 1611, stated that the greatest average density of equally sized spheres in a given space will never exceed that which can be achieved when packing cubes and hexagons in the same space. It was finally solved in 1998, through a computer-assisted proof. Sphere-packing problems in dimensions higher than three are still largely unsolved.

Many variations of the sphere-packing problem became crucial in modern information and communication theory, and molecular biology, for error-correction codes. Today's ubiquitous wireless communications, including communications with the NASA Voyagers 1 and 2 spacecraft (now in the far reaches of the solar system), and the modern cellphone would not be possible without good solutions to more general sphere-packing problems. (An error-correction code determines a valid electronic message from a noisy one by finding the closest sphere that carries a true message as well as the best packing for efficient transmission.)

Dürer also introduced an interesting tradition in mathematical education, one of teaching geometry by folding polygons into 3D polyhedra. It has been used by schoolteachers all over the world. In 1525, Dürer became the first to publish this approach.

And no mathematical table has inspired the interest of the general public like the Dürer magic square, which is prominently displayed in "Melencolia I." Even though Dürer had not invented magic squares — they seem to have been known in China for thousands of years — Dürer was responsible for popularizing them and inspiring their rigorous study in the West. A magic square is comprised of non-repeating numbers in a square grid; the numbers in each row, column and diagonal all add up to the same number. "Melencolia I" also contains the first published 4 x 4 magic square. Dürer managed to embed many interesting properties in his magic square, including the date of the "Melencolia I" print, his age and even his initials.

The term "magic" refers to more than the square's mathematical properties; magic squares were used during ceremonies well before and during Dürer's lifetime, and they continue to be viewed by some as possessing magical virtues. Dan Brown wrote magic squares prominently into the plot of a post-"Da Vinci Code" thriller.

As puzzles, these squares have fascinated recreational mathematicians — even Benjamin Franklin is said to have whiled away pre-Sudoku hours on them. Solutions of Sudoku puzzles arise from a version of magic squares, called Latin squares. More seriously, however, the mathematics of magic squares challenges researchers in new fields within combinatorics,which broadly relates to the study and counting of objects.

One of the most important extensions of magic squares belongs to Leonhard Euler (1707-1783). His paper "On Magic Squares," written in 1776, is so important that it was translated as recently as 2004 into English. Eventually, modern solutions of Euler's squares enabled the design of efficient statistical experiments and frequency-hopping wireless communications. [After 400 Years, Mathematicians Find a New Class of Solid Shapes ]

Continued interest in the symbolism of Dürer's art among engineers and scientists is one of the links that connects divergent areas of human ingenuity. Like the polymath of five centuries ago, in his birthday week, may today's art lovers take a few hours to explore the beauty of science, engineering and mathematics — and may everyone passionate about science and technology pause amidst art to find the beautiful mathematics within.

Authors' note: The May 17 conference, "500 Years of Melancholy in Mathematics," sponsored by the Alfred P. Sloan Foundation, is open to the public and targets a general audience of mathematics and science enthusiasts, especially students. It will stream live at http://engineering.nyu.edu/live. For more information on it and the Metropolitan Museum of Art event, visit the event site.