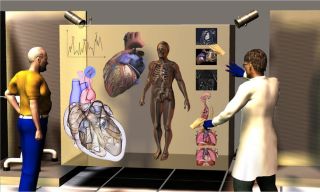 The Virtual Physiological Human could be used to test treatments on a simulation before giving them to a real patient, scientists say.
(Image: © Insigneo Institute / University of Sheffield)

A computer simulation of the human body could be used to look at the possible effects of new drugs and treatments before they are given to real patients.

The Virtual Physiological Human, a computer-simulated replica of the human body, could transform the economics and practice of modern medicine and research, scientists say.

The virtual-human project aims to allow physicians to model the mechanical, physical and biochemical functions of the body as a single complex system rather than as a collection of organs. [Ready for Med School? Test Your Body Smarts]

Scientists at the University of Sheffield in the United Kingdom are leading the project, and will present their progress on it there this week. Presentations will cover the imaging and computational modeling of lung disease, coronary artery disease, bone-fracture risk and the treatment of Parkinson's disease, as well as the emerging potential of the 21st-century laboratory.

The virtual-body system could lead to better health care by offering personalized care and a more holistic, preventative approach to medicine, the scientists developing the system said.