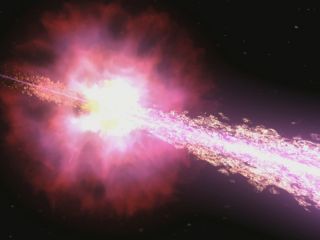 Scientists work out the steps of making a powerful gamma-ray laser powered by antimatter. Gamma rays are the most energetic form of light produced by the hottest regions of the universe, such as in this gamma-ray burst, shown here.
(Image: © NASA/Swift/Cruz deWilde)

Building gamma-ray lasers powered by an exotic hybrid of matter and antimatter may sound like science fiction, but scientists are now a step closer to doing it.

Whereas the wavelengths of traditional lasers run the gamut from infrared to X-rays, a gamma-ray laser relies on light waves even smaller than X-rays. For instance, the antimatter-powered laser would produce light with wavelengths a thousandth the size of modern-day X-ray lasers, enabling it to probe incredibly tiny spaces and making it useful in medical imaging technology.

In the new research, Yi-Hsieh Wang, Brandon Anderson and Charles W. Clark, all from the University of Maryland Joint Quantum Institute, detailed how a special type of matter-antimatter mixture called positronium would work as the gain medium, the material that turns ordinary light into a laser beam.

They found that, when a certain amount of energy was provided for positronium, it would make laser light, but at other energies, it wouldn't. Furthermore, the researchers found that the positronium has to be in a state called a Bose-Einstein condensate, or a strange chilled gas state, in order to create a laser beam. [Wacky Physics: The Coolest Little Particles in Nature]

Generating the laser light depends on how much energy is put into the positronium by a burst of infrared light; only energies in a certain range produce the lasing effect, Clark said.

"Think of a tuning knob [from low to high energy," Clark told Live Science. "Below, say, five, we see isotropic emission of gamma radiation, going in all directions. When you pass five, you'll all of a sudden see a sharp line of radiation in two directions." That line — really a cigar-shaped blast of photons — is the laser. Above that energy the gamma rays just go in all directions, with no lasing.

This weird effect has to do with the very nature of positronium. Each positronium "atom" is actually an ordinary electron and a positron, or the antimatter equivalent of an electron. Electrons are negatively charged, while positrons are positively charged. When the two touch, they annihilate and release two photons — light — at high energies, in the gamma-ray range, moving in opposite directions.

Sometimes, an electron and a positron can end up spinning around each other, similar to the way electrons orbit protons to make atoms. However, positrons are much lighter than protons, so positronium isn't stable — and within less than a billionth of a second, the electrons and positrons will collide and annihilate each other.

To make a gamma-ray laser, scientists would need to make the positronium really cold — close to absolute zero (minus 460 degrees Fahrenheit, or minus 273 degrees Celsius). That chilling process turns the positronium into a state of matter called a Bose-Einstein condensate, in which all the atoms — or, in this case, electron-positron pairs — enter the same quantum state, essentially acting as a single supersized atom. [Science Fact or Fiction? The Reality of 10 Sci-Fi Concepts]

One aspect of quantum state is spin, which is numbered minus 1/2 or 1/2. In the positronium, the spins (of the electron and positron) must add up to 1 or 0. When they add up to 1, the positronium takes a fraction of a nanosecond longer to annihilate itself. In that bit of a second, the Bose-Einstein condensate is made up largely of spin-1 positronium.

A light pulse with far-infrared wavelengths can switch the positronium to spin-0. The spin-0 positronium annihilates itself and generates the bidirectional beam of coherent gamma rays — the laser. This works because all of the positronium "atoms" have the same spin number. If it were a random collection of spin-0 and spin-1 positronium, the light would just scatter in all directions.

The researchers also found out exactly how many atoms of positronium would be needed to make a gamma-ray laser work: about 10 to the 18thpower atoms per cubic centimeter are needed to make the condensate. That may sound like a lot, but it's a fraction of the density of air, which has about 2.5 x 10 to the 19th power atoms in the same volume.

Allen P. Mills, and the late Philip Platzmann then of Bell Labs, first proposed such a gamma-ray laser in 1994, when the two were at Bell Labs. Mills said that by working out the math, Wang, Anderson and Clark were able to narrow down the conditions under which such a laser could be built.

"Besides giving us a glimpse of what will be required for a practical device if it is ever attempted, including details of the [radio frequency] pulse structure that would be needed … this paper introduces the fascinating physics that could be explored using a [Bose Einstein condensate]," Mills, currently a professor of physics and astronomy at the University of California, Riverside, wrote in an email to Live Science.

The new work is detailed in the journal Physical Review A.