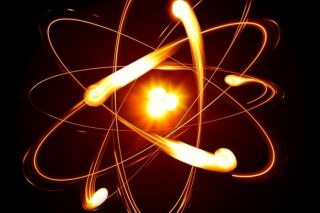 Finding out the roundness of an electron could help scientists test extensions of the standard model, the reigning particle physics model.
(Image: © Roman Sigaev | Shutterstock)

A new technique could one day provide the most precise measurement yet of the roundness of an electron, scientists say.

That measurement, in turn, could help scientists test extensions of the standard model, the reigning particle physics model that describes the behavior of the very small, said study co-author Eric Cornell, a physicist at the National Institute of Standards and Technology and the JILA Center for Atomic, Molecular & Optical Physics in Boulder, Colo.

An electron's shape comes from a cloud of virtual particles surrounding a dimensionless point; that cloud can be aspherical if there's a greater pull by either its positive or negative pole. Past measurements have suggested the positive and negative charges are at equal distances from the center of the electron, Cornell said. This measure of the separation of these two charges is called the electric dipole moment.

But physics theories such as supersymmetry, which purports that every known particle has a supersymmetric partner particle with slightly different traits, assume that the charge distribution in an electron is actually ever-so-slightly lopsided, giving the electron a more squashed or egg shape. [The 9 Biggest Unsolved Mysteries in Physics]

"There are a lot of people who would bet that it's not perfectly round," Cornell told LiveScience.

However, so far, no measurements have been precise enough to say with certainty whether the electron is truly round.

In search of those answers, Cornell and his colleagues developed a new method to measure the electric dipole moment of the electron.

"Usually, when you apply a really large electric field to an electron, it goes 'zip' and flies away," Cornell said, referring to past methods to measure the electron shape.

They then pulsed the ion with radio waves and measured the frequencies at which the electron tipped over when it was pointing one way or another. The difference between those two frequencies reveals whether the electron has a dipole moment.

Though the current measurements aren't as precise as previous ones, the new technique allowed the team to trap an electron for an unprecedented amount of time — about 100 milliseconds, which is 100 times longer than anyone else had ever done. And the longer the team can measure the electron, the more precise the measurement can become.

The team now hopes to trap more molecules in order to do more measurements at once. They'd also like to see those measurements be more sensitive at detecting when electrons flip over. In addition, the researchers believe it's theoretically possible to trap the electrons for 1 second before the molecules zip away — which could allow them to get the most precise measurement of the electron's electric dipole moment yet.

The findings were published Dec. 5 in the journal Science.