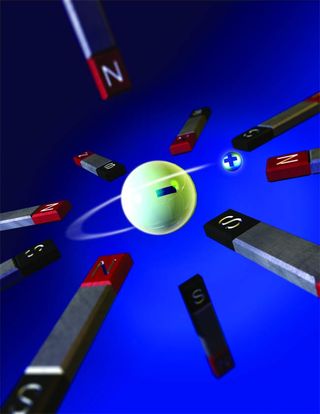 The mystery of whether antimatter falls up or down could be solved with a new experiment to weigh matter's odd cousin, researchers say.

Antimatter is identical to normal matter in some respects but the exact opposite in others. For instance, although the antiproton has the same mass as its counterpart the proton, it is negatively charged instead of positively charged.

When a particle meets its antiparticle, they annihilate each other, giving off a burst of energy — a proof of Einstein's famous equation, E=mc2, which revealed mass can be converted to energy and vice versa. A gram of antimatter annihilating a gram of matter would release about twice the energy as the nuclear bomb dropped on Hiroshima. (Have no fear of antimatter bombs popping up anytime soon — researchers are very far from creating anywhere near a gram of antimatter.)

Scientists have long wondered if antimatter falls down, responding the same way to gravity as ordinary matter. Physicists have generally assumed it does, but many have kept an open mind regarding antimatter's behavior since much about it remains a mystery. [6 Weird Facts About Gravity]

"We don't really understand antimatter," study author Holger Müller, a physicist at the University of California at Berkeley, told Live Science. "For instance, the fundamental laws of physics suggest there should be equal amounts of matter and antimatter in the universe, but our observations tell us there is vastly more matter than antimatter in the universe, and there is no agreed-upon explanation for that."

In addition, there is much about gravity that remains uncertain. For instance, astronomers looking at how galaxies rotate discovered there is far more gravity holding them together than there should be, "which is usually ascribed to gravity from dark matter, but nobody knows what that is," Müller said.

Direct evidence of whether or not antimatter falls downward remains difficult to experimentally gather. Antimatter is rare, and annihilates when it comes into contact with regular matter.

Now researchers have proposed a device they suggest could help solve the mystery of whether antimatter falls up or down.

"We don't understand 100 percent about antimatter, and the same is true for how gravity works, so looking at them in combination seems a good spot to look for a new discovery in physics," Müller said.

The instrument, a light-pulse atom interferometer, could measure the behavior of any particle — atoms, electrons and protons, as well as their antimatter counterparts. It works by studying cold particles — ones cooled to a degree above the coldest possible temperature, absolute zero.

At such cold temperatures, scientists can see particles behaving much like waves, rippling up and down within a chamber. By analyzing how these "matter waves" interfere with each other, the researchers can distinguish the force of gravity each particle is experiencing.

Müller and his colleaguesare working to construct their device and integrate into the ALPHA experiment at the CERN physics lab in Geneva, Switzerland, which makes, captures and studies atoms of anti-hydrogen, the antimatter counterpart of the simplest atom, hydrogen.

Since the researchers have very few anti-hydrogen atoms for experiments, their system essentially "recycles" each atom. Magnetic fields trap the atoms so the device can potentially measure the way each atom behaves multiple times.

"We need to get a signal out of each and every single atom — we can't afford to lose a single one," Müller said.

The scientists expect their system will reach an initial accuracy of better than 1 percent for measuring how anti-hydrogen falls, and they noted they could eventually improve this accuracy 10,000-fold.

The scientists detailed their findings online March 25 in the journal Physical Review Letters.