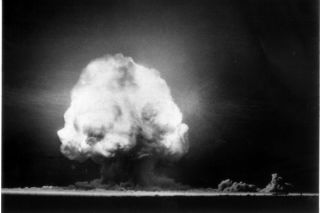 In Dan Brown's book "Angels and Demons," a secret society tries to destroy the Vatican using an antimatter bomb. The fictional bomb works by touching 1 gram of matter to 1 gram of antimatter a substance made of sub-atomic particles with properties opposite those of normal matter particles causing them to annihilate in a tremendous explosion.

If you read that book, you might be feeling a little nervous lately, with physicists at CERN in Switzerland making headlines by creating detectable quantities of antimatter , and sustaining them for about 16 minutes. What if the antimatter atoms they make come in contact with normal atoms? Will the mutual annihilation and conversion to pure energy destroy the world?

No, say physicists. Clara Moskowitz, a senior writer for SPACE.com, a sister site to Life's Little Mysteries, who has covered antimatter research extensively, recently explained why not in a radio interview.

"I can tell you to rest your fears," Moskowitz told CBS Seattle Radio. "It's true that when matter and antimatter meet, they do annihilate in a big explosion and convert their mass to energy. So I can see where ... Dan Brown thought that this sounded worrisome. But in the history of the world, we've only created such a tiny, tiny amount of antimatter that if you were to annihilate it all at once, you wouldn't have enough energy to boil a cup of tea, let alone blow up anything."

CERN physicists have confirmed this. "If we could assemble all the antimatter we've ever made at CERN and annihilate it with matter, we would have enough energy to light a single electric light bulb for a few minutes," the group responsible for creating the antimatter explain on their website.

Scientists are neither interested in creating nor able to create enough antimatter to make a world-destroying antimatter bomb. They create antimatter by colliding accelerated particles at very high energies, a process that transforms kinetic energy into mass . But the process is extremely inefficient; just one billionth of the initial energy gets transformed into an antimatter particle.

"Thanks to the inefficiency of the transformation process of energy into antimatter we are safe," CERN physicist Rolf Landua explained on the institute's website. "We do not have to worry about military applications."

"Take Dan Brown's hypothetical 1 gram of antimatter," he continued. "With present CERN technology, we would be able to produce about 10 nanograms of antimatter per year, at a cost of about $10-20 million. Then we would have to deal with the problem of how to store so many particles (about 10,000,000,000,000,000 antiprotons). Obviously, it would take 100 million years and $1,000 trillion to make 1 gram. This appears ambitious even for the US military."

What's more, such ambition would be pointless. "Why construct a 20 kilo-ton antihydrogen bomb when thousand times more powerful hydrogen bombs do already exist in the stockpiles of the superpowers? " Landua wrote.