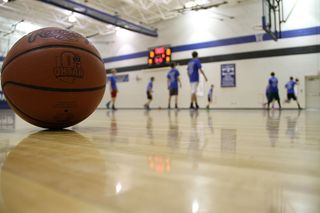 A new study by researchers at Nationwide Children's Hospital charted more than two-and-a-half-million injuries to high school basketball players between 2005 and 2011. Experts say fewer than half of all high schools have athletic trainers on staff to handle sports injuries and to help players safely return to play — and the numbers are even worse at the middle school level.
(Image: © Nationwide Children's Hospital.)

When most people think of high-injury sports activities in children, their minds often go straight to the contact sports — football, hockey and wrestling. As it turns out, basketball should also be included in that list. Basketball is one of the most popular high school sports, with over one million participants annually. From slamming into other players when going up for a rebound to slipping and twisting an ankle when going in for a layup, basketball presents a lot of risks for children — risks that can be curbed by making some changes on the sidelines.

My colleagues and I just completed a study where we reviewed the numbers and types of basketball-related injuries to high school-aged basketball players. We looked at more than six years of data and found more than 2.5 million injuries among these players. A million of these injuries were treated in an athletic training setting and 1.5 million were treated in hospital emergency departments across the country.

So how do these athletes and their families decide whether an injury should be treated by a certified athletic trainer versus an emergency department? The truth is, many of the injuries that resulted in a visit to an emergency department were mild or moderate and perhaps did not require that level of care. Athletic trainers who work directly with teams are often the most qualified individuals to be treating players when they get these mild or moderate injuries. If you think about it, it really makes sense. These athletic trainers work with the athletes on a daily basis — both when the players get hurt and when they need help rehabilitating themselves to get back to the game safely. Unfortunately, not all school districts have the ability to employ athletic trainers.

In fact, only about 42 percent of high schools in the United States have athletic trainers and I suspect this number is even lower at the middle school level. While it's true that athletic trainers can't treat every injury, they help to make the system that treats young athletes more efficient. Athletic trainers can make the call when determining when an injury is serious enough for a visit to the emergency department. They can also ensure that athletes returning from injury take the proper steps to have a safe transition back into competition, preventing recurring injuries.

One very important area where athletic trainers can help is in the diagnosis and treatment of concussions. Because they interact with the players every day, they can assess how a player is healing and when it is safe for him to return to play. This is extremely important in concussion treatment since the signs of a concussion are often not initially apparent.

As for injury prevention, I cannot stress enough the importance of stretching and warming up properly for all sports, especially basketball — and, it's important to always wear a mouth guard for protection.

The numbers from our study are truly staggering — there are a lot of injuries, a lot of medical care expenses and a lot of time lost from a sport that these kids really love. This is a big problem that we need to continue to work on. We need to do a better job of keeping kids safe while still allowing them to play the game. Encourage your child's school system to have an athletic trainer on hand — it would be great to see this kind of care in all high schools and middle schools across the country in the near future.

Author's Note: More resources for young basketball players and their parents can be found on the Nationwide Children's Hospital website.