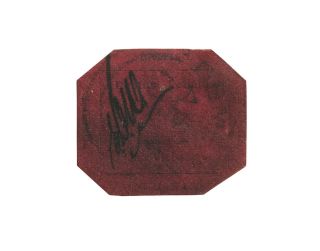 The British Guiana One-Cent Magenta postage stamp has been described as the most famous stamp in the world.
(Image: © Sotheby's)

An extremely rare 158-year-old postage stamp — one that has been described as the Holy Grail for stamp collectors — will be auctioned off next month in New York City. The famous postal artifact could fetch as much as $20 million, which would eclipse all previous auction records for a stamp, according to Sotheby's New York, which is handling the public sale.

The stamp, which is known as the British Guiana One-Cent Magenta, was issued in 1856, after a shipment of stamps to British Guiana (now the independent nation of Guyana) from a manufacturer in England was delayed. To avoid disrupting postal service throughout the coastal nation, the postmaster commissioned an emergency supply of postage stamps: the one-cent magenta, the four-cent magenta, and the four-cent blue. The stamps were printed by the local Royal Gazette newspaper, but the artifact being put up for auction in June is the sole-surviving example of the one-cent magenta.

"I have been with Sotheby's all my working life, but before I knew about the world's greatest works of art, before I knew about the Mona Lisa or Chartres Cathedral I knew about the British Guiana," David Redden, director of special projects and worldwide chairman of Sotheby's Books Department, said in a statement. "For me, as a schoolboy stamp collector, it was a magical object, the very definition of rarity and value, unobtainable rarity and extraordinary value. That schoolboy of long ago would be bemused and astonished to think that he would one day, years later, be temporary guardian of such a world treasure."

Sotheby's will showcase the British Guiana One-Cent Magenta this spring in public exhibits in London, Hong Kong and New York. The auction is scheduled to take place on June 17 in Manhattan.