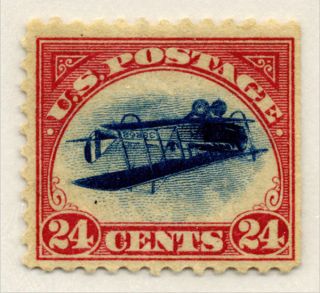 Sometimes, the United States Postal Service's mishaps become major gains for stamp connoisseurs. One of the most famous USPS blunders started out as an incorrectly printed $.24-cent stamp and was eventually auctioned off for more than $800,000nearly a million dollars. It goes by the odd name "Inverted Jenny."

Issued on May 10, 1918, the red and blue stamp accidentally shows a Curtiss JN-4 ("Jenny") biplane the model used by the USPS to deliver mail at the time flying upside down. The mistake occurred because each sheet of the 24-cent stamps was printed in two colors, and so they had to be fed through the printing press twice once for red, once for blue. A few of the sheets of the stamps were inserted in the wrong direction for the second pass, and so the blue plane appeared upside down inside the red frame.

In total, 700 of the "Inverted Jenny" stamps were printed, and 100 were sold before USPS inspectors noticed the error and began printing the plane right side up. Remarkably, all 100 stamps were sold in a single sheet to stamp collector William Robey, who purchased them from a post office in Washington, D.C., in 1918. He paid $24 for the stamps. The other 600 were destroyed.

The sheet was later resold and separated into individual stamps and blocks. In November 2007, an unidentified bidder paid $977,500 for just one of the rare stamps for $825,000 fromthrough the Robert A. Siegel auction housegalleries Heritage Auction Galleries.

By comparison, an unused, regular copy of the corrected Jenny stamp is worth something less than $100 in today's market.