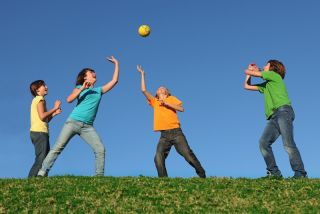 On what has been billed as the first "U.S. Report Card on Physical Activity for Children and Youth," the country gets a failing grade when it comes to getting children to bike or walk to the places they go. And the nation earned D's for children's overall physical activity, and for avoiding sedentary behaviors.

The report card — presented at the Congressional Fitness Caucus briefing in Washington, D.C., on Tuesday (April 29) — was devised by the National Physical Activity Plan (NPAP) alliance and the American College of Sports Medicine (ACSM).

"Physical-activity levels in American youth fall far below the recommended level, with only about one-quarter of children aged 6 to 15 meeting the current guideline of 60 minutes of moderate physical activity per day," said Dr. Russell Pate, chairman of the alliance and a professor at the Arnold School of Public Health at the University of South Carolina. "Fifty percent of waking hours are spent in sedentary activity for children and youth, and this percentage rises with age."

The NPAP alliance is a nonprofit coalition comprising dozens of health organizations, including the Centers for Disease Control and Prevention, the American Heart Association and the American Cancer Society.

The report card measured 10 indicators of kids' activity levels, including their participation in organized sports and unstructured play, along with their school physical-education classes and community parks and playgrounds.

The highest mark, a 'B minus', was awarded for the nation's community efforts, with 85 percent of children living in a neighborhood with at least one park or playground. The 'F' in transportation resulted from only 13 percent of children walking or biking to school and related activities.

The 'D' in sedentary behavior was for the 54 percent of children who spend more than 2 hours daily in front of a TV or computer for noneducational reasons. Only 8 percent of kids ages 12 to 15 get more than 60 minutes of moderate activity a day, which resulted in a 'D minus.'

Aside from the availability of parks and playgrounds, there was hardly a glimmer of hope in the report, the alliance said, although for some categories — such as government investment and peer interactions — there was not enough information to provide a meaningful grade.

Dr. Peter Katzmarzyk of Louisiana State University, chairman of the NPAP alliance's advisory committee, said he would like to see the grim report "galvanize researchers, health professionals, community members and policymakers across the U.S. to improve our children's physical activity opportunities, which will improve health, prevent disease and disability, and enhance quality of life."

The 40-page report is available at http://www.physicalactivityplan.org.

Follow Christopher Wanjek @wanjekfor daily tweets on health and science with a humorous edge. Wanjek is the author of "Food at Work" and "Bad Medicine." His column, Bad Medicine, appears regularly on Live Science.