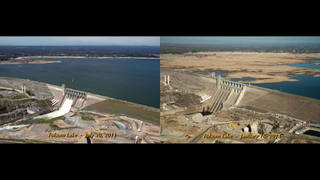 The severity of California's drought is visible at Folsom Lake, near Sacramento. On July 20, 2011, the lake was at 97 percent of capacity; on Jan. 16, 2014, it was at 17 percent.
(Image: © California Department of Water Resources)

Raghu Murtugudde is executive director of the Chesapeake Bay Forecasting System at the University of Maryland Earth System Science Interdisciplinary Center (ESSIC) and a professor in the Department of Atmospheric and Oceanic Science. Murtugudde contributed this article to Live Science's Expert Voices: Op-Ed & Insights.

The old Chinese curse apparently says, "May you live through interesting times,'' and we certainly are — particularly when it comes to climate change. The hiatus in global warming, unanticipated by popular climate models, has engendered a healthy scientific debate on the causes — ranging from stratospheric humidity changes to the heat escaping into the bottom of the ocean.

None of the models has offered predictions of when this pause might end. Considering the continued increase in greenhouse gases and their inexorable impact on the planet's energy balance, it is clear that the global-warming pause is just a snooze button and we will wake up to continued warming one of these days because greenhouse gases trap more of the sun's energy and it is either being stored in the ocean or being thrown back to space — and neither will continue ad infinitum. As interesting and as challenging as the scientific problem is, it does raise questions about whether the climate community is not comfortable accepting that there is much that is not understood about the "natural" or "internal" variability of Earth's climate system.

The natural, or internal, variability of the climate system is essentially the rich spectrum of timescales in weather and climate that are not directly forced by the daytime and seasonal energy received from the sun. For example weather can change many times a day and we can have warm days within a harsh winter. That continuum of timescales is generated by internal feedbacks in the Earth system between the atmosphere, land, ocean and ice.

We in the climate science community, are clearly earnest about our concern for the future of our planet's climate, but we need to avoid being deadly earnest in our messages about global warming to avoid even the appearance of an end-justifies-the-means approach. The climate system is too non-linear to be perfectly predictable, and even a high level of scientific understanding does not mean predictions are possible at all timescales because of of irreducible uncertainties of this internal variability.

The epic California drought and the recent harsh winter over North America are clear evidence that internal variability is alive and well. It also confirms that there are regions on the planet where natural or internal variability will be larger than the overall warming signal for many more decades, making it difficult to accurately project the impacts of global warming or to clearly attribute local changes to global warming.

It is humbling that in the face of society's relentless consumption of fossil fuels and emission of greenhouse gases, the Earth system has a way of hiding away or getting rid of the excess heat and producing a lull.

Scientists currently attribute a similar flattening of the warming trend in the 1960s to an increase in coal burning and sulfate aerosols, which likely scattered away more of sun's energy, leading to cooling. The current slowdown likely involves more heat uptake by the ocean and also more energy loss to space related to the persistent La Niña pattern in the tropical Pacific Ocean. It is still not clear whether or not this pattern is a response to global warming. Either way, it is worth noting that this pattern is hardly benign, since it is associated with droughts over parts of North America and thus may indicate that even a pause in global warming comes served with a side of unwanted dishes.

It is clear that many extreme rainfall events and heat waves already are the result of warmer temperatures, and the associated increases in humidity in the atmosphere.

All weather now is occurring in the backdrop of a warmer and wetter world, hence carrying a contribution from global warming. But the slowdown in global warming during the last 15 years, together with California's severe drought, and the memorable North American winter just passed, have provided a trifecta of opportunities for everybody to jump on their favorite narrative, from global warming worsening the California drought to winters becoming harsher as a result of global warming to, of course, global warming being a hoax perpetrated by climate scientists (even though more than 98 percent of the climate community agrees on the fundamental science).

Similarly, the harshest winters in a generation over North America produced temperatures "colder than Mars,'' and generated much scorn from global-warming deniers, despite the fact that Alaska was warmer than Washington, D.C. during the same winter, and the stretch of Europe from Norway to Siberia experienced some of the warmest winter temperatures.

While "polar vortex'' became a household word, the story that got strong legs during this winter was the one about the reduction in the summer Arctic ice extent and the meridional migrations of the Jet Stream.

But placing the winter in the context of past winters again led some prominent scientists express a voice of concern about the link to the reduction in Arctic ice extent during summer. Mike Wallace of the University of Washington repeated the message in a Washington Post Op-Ed.

Weather varies more during the winter than during the summer, and the high latitudes have larger seasonal contrasts than the tropics. Even though it is common to confuse weather with climate, weather does offer a window into natural variability with epic droughts and harsh winters. We just need to build on people's intrinsic knowledge of weather to build their confidence in our knowledge of climate variability and change.

People take decisions on what to wear or whether to go on vacation or to carry an umbrella based on weather forecasts. That shows sophisticated handling of uncertainties in forecasts. Reliable extended range forecasts and skillful seasonal outlooks will let them extend their decision horizons from hours and days to weeks and months, and eventually, to years.

The human mind is naturally calibrated to take the words of politicians with a grain of salt but society expects scientists to be "the peddlers of truth and not arbiters of truth." We would be wise to let that principle guide us, always, especially when Mother Nature asserts her power through internal variability, and reminds us that she still has plenty of her natural face left to show us.

The author's most recent Op-Ed was, "Guacamole and Coke are Latest Victims of a Warming Planet." This Op-Ed was adapted from "Is 'Internal Variability' Responsible for the California Drought, the Harsh Winter, and the Global Warming Pause?" on Gudde-Blog. The views expressed are those of the author and do not necessarily reflect the views of the publisher. This version of the article was originally published on Live Science.