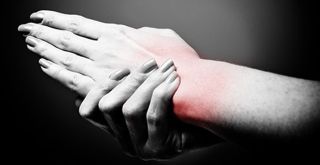 (ISNS) -- The perceived size of your hand affects how intensely your hand feels pain, according to a new study.

A paper published in Neuropsychologia in March detailed the results of an experiment in which each participant was subjected to a pinprick-like sensation on one fingertip. The researchers used a lens to modify the size of the hand receiving the painful stimulus to look larger or smaller than normal in some of the experiments. They compared these responses to the pain response in the participants' unmodified hand.

Meanwhile, a machine monitored an electrical property in the skin known as conductance response –also called galvanic response – by measuring the change in sweat production.

“Skin conductance response is quite an old machine” that measures arousal in humans, said Daniele Romano, an experimental psychologist at the University of Milano-Bicocca in Milano, Italy and the lead author of the study. When someone is aroused, the skin produces more salty sweat, which increases its electrical conductivity. Arousal can indicate many things: fear, anxiety, anticipation, threat, thrill, and excitement.

When the participants viewed their hand under a magnifying glass, they responded less intensely to the actual pain than in their unmodified hand. However, they anticipated the pain more when their hand was enlarged.

Romano thinks that the larger hand draws more attention than the normal-sized one. He speculated that the subject’s attention causes them to anticipate the needle more and thus lessen the painful sensation because the participant is mentally prepared for it.

It’s hard to know for sure because everyone feels pain differently — especially people with chronic pain.

Lorimer Moseley, a professor of pain science at the University of South Australia, performed a similar experiment on people with chronic pain in their hand.  The experiment required subjects to perform movements that typically induced pain. In those subjects, visually expanding the hand made the pain worse.

While the results appear contradictory, both Moseley and Romano think that their studies represent the varied and nuanced way the brain interacts with the body and the way people perceive pain.

“The brains of healthy volunteers are different than the brains of people with, for example, chronic complex regional pain syndrome,” Moseley said. “Some of the disruptions or the differences in brains relate very sharply to the way the brain represents the body and maps the surfaces of the body.”

Phantom limb syndrome demonstrates how pain is a complex and subjective experience. People can feel terrible pain even when there is no physical cause.

Moseley admired the thoroughness of Romano’s study, but cautioned that it’s hard to be precise about pain by measuring the skin conductance response.

“There are fundamental differences about what we do experimentally and what happens clinically. And I wonder how big a part of this contrasting result that plays, because I think it’s potentially a big part,” he said. “It may be that when you make a larger image in a laboratory setting you actually give reinforcing messages that all is okay, and all is well, and that is what has the analgesic effect.”

Nevertheless, Romano’s results may still have some practical applications.

“What we obtain at the behavioral level, not at the physiological level, is that we change the unpleasantness of the stimulation and not the intensity,” Romano said. “The more you anticipate, the less you will respond.”

In other words, if you know something is going to be painful – like getting a shot or a tattoo – you might benefit from watching closely instead of looking away.

Moseley said that distraction works well, but “there will be some people that refuse to disengage and look away.” Perhaps Romano’s protocol would help lessen their pain, he mused. “Someone should try that experiment.”

Try it out – bring a magnifying glass with you to your next doctor’s appointment.

This story was provided by Inside Science News Service. Cynthia McKelvey is a science writer based in Santa Cruz, Calif. She tweets @NotesOfRanvier.