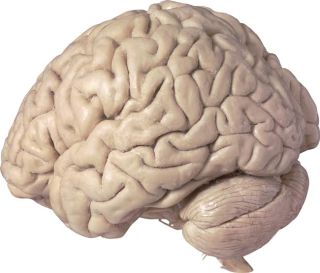 A human brain preserved in silicone.

In the absence of vision, the world is experienced as sequences, explained neurobiologist Ehud Zohary of Hebrew University in Jerusalem. For instance, to identify otherwise indistinguishable objects, such as different brands of yogurt that vary only in their labeling, the blind typically place objects in arrangements of their own making and give mental tags for each of them, such as “the second item on the left.”

Zohary and his colleagues reasoned that since the blind constantly use memory strategies to remember things are, that “practice makes perfect,” giving the blind superior memory skills for other tasks.

The scientists tested 19 congenitally blind and 19 sighted people in two memory tasks. In the first, the volunteers heard a list of 20 words and had to recall them. In the second, they had to remember not just the words, but their order in the list as well.

Blind volunteers recalled 20 to 35 percent more words than sighted ones did, indicating a better memory overall. Their greatest advantage, however, was the ability to remember roughly twice as many more words in sequences according to the right order, findings detailed online June 21 in the journal Current Biology.

“Normally 20 to 30 percent of the brain is basically devoted to vision. With the congenitally blind, you have this brain area, the visual cortex, not getting its natural input,” Zohary told LiveScience. “We had shown that congenitally blind people appeared to be using the visual cortex for other needs, and now we may be seeing part of how this area is getting used for other functions, to maybe be more involved in memory and language processes.”