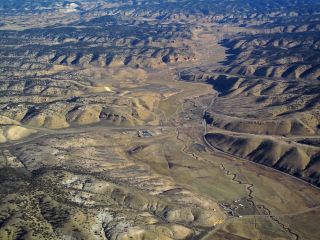 Greg Munson is the former General Counsel and Deputy Secretary at the Florida Department of Environmental Protection. He is now a shareholder in the environmental and land use practice group of the Gunster law firm, and working in Tallahassee, Fla. He contributed this article to Live Science's Expert Voices: Op-Ed & Insights.

The administration of U.S. President Barack Obama is changing a key provision in the Clean Water Act (CWA) rules, with widespread impacts expected around the country. On March 25, the U.S. Environmental Protection Agency (EPA) and the Army Corps of Engineers released a draft rule defining "waters of the United States" under the CWA.

The act applies to all "waters of the United States" so the new rule effectively defines its reach, and the newly released rule appears unlikely to end the controversy triggered by an earlier, leaked version.

The CWA affects many aspects of federal and state regulation , such as industrial discharges to waters, federal endangered species review and mitigation required by the Army Corps' wetlands permits, all of which are subject to third-party legal challenge. Changes to the definition can therefore have far-reaching impacts on agriculture, industry and development. The rule is the most significant CWA development since the Supreme Court weighed in on the same topic in 2006, and appears to be a significant expansion in the nation's primary environmental law related to water.

The new rule makes some significant additions to the existing rule, including an extensive subset of definitions of words appearing in the original and new definition of "waters of the United States."

In addition to the so-called traditional waters covered by the CWA, such as waters used in commerce and interstate waters, the new rule also adds a new category for "other waters," defined as those that, either alone or with other "similarly situated" waters in the "region," have a "significant nexus" to existing traditional waters. A significant nexus is "significantly affect[ing] the chemical, physical, or biological integrity of a water" in the traditional categories, where such effect is "more than speculative or insubstantial."

This language is based on the Supreme Court's decision in Rapanos v. United States from 2006, although Rapanos didn't define "similarly situated," which is now defined in the new rule. Specifically, similarly situated waters are waters that "perform similar functions" and are sufficiently close to a traditional water that they can be "evaluated as a single landscape unit." According to the rule's preamble, a region refers to the watershed of the traditional water. [How Clean Air Act Made Atlanta Rains Rebound ]

Neighboring waters are defined to include waters in the floodplain and riparian areas, which are themselves defined. Waters of the United States must, under Rapanos, have a significant nexus with traditional waters. The agencies say that the scientific report accompanying the rule shows that the vast majority of waters in the floodplain or riparian area have a significant nexus with traditional waters and are therefore appropriate for categorical inclusion within the CWA. States with a large amount of flat terrain or coastal marshes, like Florida, can expect this provision to work a significant expansion in the CWA.

Another new feature of the rule is a list of waters that are not considered waters of the United States. According to the agencies, these exclusions existed in the rule, in guidance documents, or in practice, but were never explicitly listed in one location in the rule. These explicit exclusions appear to be a response to concerns generated from the leaked version about the rule's impact on agriculture, although it seems doubtful that the exclusions will, in fact, resolve those concerns.

The scientific report accompanying the rule is undergoing review by EPA's Science Advisory Board. The agencies have said they will not finalize the rule until review is complete by the SAB, but it is not clear whether commenters will have the benefit of the SAB review in time to submit their own comments. The rule should be published soon in the Federal Register, and will kick off a 90-day public comment period.

On the whole, the rule appears to be seize every opportunity left open after the Rapanos ruling to expand the reach of the CWA. Moving forward without the benefit of the SAB final review also leaves the impression of a pre-determined agenda. The Agencies would be well served to slow down, heed concerns about their categorical approach, and achieve their stated and worthy goal of increased clarity by seeking the middle ground.