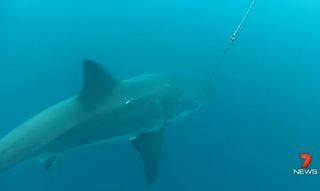 A massive great white shark has been spotted swimming close to an Australian beach, scaring the locals and forcing the beach to close, according to news reports.

The female shark, nicknamed "Joan of Shark"by local fisherman, is more than 16 feet (5 meters) long and weighs about 1.8 tons (1.6 metric tons), The Telegraph reported. Signals from a satellite tag on the shark alerted authorities to its location, and city officials warned residents of Albany, Western Australia, to stay out of the water.

Joan was the largest of her kind to be electronically tagged. Fisheries protection officers injected an external tracking device in the shark and tracked her for three weeks. They captured the shark again a week later and placed a more sophisticated tag in her stomach that will enable the officers to track her for at least a decade, The Telegraph reported. A network of more than 300 monitors on the seabed can pinpoint the shark's movements, sending signals via satellite to warn authorities of her whereabouts. [Image Gallery: Great White Shark Pictures]

The shark may have smelled a dying humpback whale that was beached in the area, a spokesman for the state department of fisheries said, according to The Telegraph.

Great white sharks are the largest predatory fishes on the planet. They can reach up to 20 feet (6 m) in length and weigh up to 2.5 tons (2.3 metric tons).

They are highly intelligent and curious creatures, with well-developed senses. They can swim at speeds of up to 15 mph (24 km/h), and can leap completely out of the water when hunting prey. They attack quickly, from below, and pack a powerful, sometimes deadly, bite.

These massive sharks have 300 teeth, arranged in up to seven rows. Young great whites feed on fish, rays and other small sharks. Adults hunt harbor seals, sea lions and elephant seals, or scavenge whale carcasses for the blubber.

Great whites have been known to attack humans, but not eat them. Great white sharks have killed a number of swimmers and divers off the coast of Western Australia in the past four years.