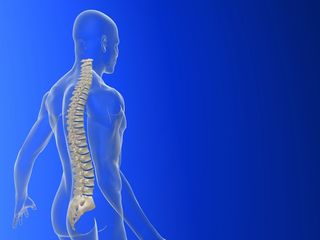 Damaged nerves could be reprogrammed and even regenerated with chemical and genetic treatments, a pair of new discoveries suggest.

Damage to the central nervous system — the brain and spinal cord — is currently irreparable. This often leaves those who suffer from spinal cord injury, stroke or brain trauma with serious impairments such as paralysis and loss of sensation.

In contrast, people with nerve damage in their peripheral nervous system, which controls areas of the body outside the brain and spinal cord, have about 30 percent of the nerves grow back, and there is often recovery of movement and function.

"Due to the complexity of the structure of the central nervous system, regrowth leads most often to incorrect rewiring, such as pain," said study author Simone Di Giovanni, a neuroscientist and neurologist at Imperial College London. "The peripheral nervous system is much more simple and has effective, although partial, regeneration." [Bionic Humans: Top 10 Technologies]

They found that when nerves are damaged in the peripheral nervous system, they emit signals to switch on a program to initiate nerve growth. This program is "epigenetic," meaning that without altering DNA, it can activate or deactivate genes. This is the first demonstration of a specific epigenetic mechanism responsible for nerve regeneration.

The researchers pinpointed a protein, called P300/CBP-associated factor (PCAF), as being central to initiating nerve regrowth. They found that when this protein was injected into mice that had damage to their central nervous system, it significantly increased the number of nerve fibers that grew back.

"This work opens an exciting new field of investigation, placing epigenetic regulation as a new, very promising tool to promote regeneration and recovery after spinal injury," Di Giovanni told Live Science. He and his colleagues detailed their findings April 1 in the journal Nature Communications.

"The ultimate goal could be to develop a pharmaceutical method to trigger the nerves to grow and repair, and to see some level of recovery in patients," Di Giovanni said in a statement. "We are excited about the potential of this work, but the findings are preliminary."

"The next step is to see whether we can bring about some form of recovery of movement and function in mice after we have stimulated nerve growth through the mechanism we have identified," Di Giovanni said. Eventually, the research could lead to a drug that could be tested in people, although there are many hurdles to overcome first, he said.

In another study, scientists investigated the scar tissue in spinal cords that forms after injuries to axons. These scars prevent damaged nerves from regrowing.

Past research suggested one way to promote the growth of injured spinal nerve cells was to administer an enzyme known as chondroitinase ABC (ChABC), which digests scar-forming proteins. However, because this enzyme breaks down quickly, maintaining these beneficial effects for a long time would require repeatedly administering the enzyme to the spinal cord.

Instead of repeatedly injecting this enzyme into the spinal cord, researchers have explored using gene therapy as a way to get spinal cord cells to manufacture the enzyme themselves. Gene therapy injects cells with the genes for proteins such as enzymes.

Scientists at King's College London and their colleagues used a single injection to deliver their ChABC gene therapy into the spinal cord of injured adult rats.

The gene therapy led the rat spinal cord cells to generate large amounts of the scar-busting enzyme in the damaged areas. Within 12 weeks, the rodents recovered their hind limb function and were able to navigate the rungs of a horizontal ladder.

"These findings provide convincing evidence that gene therapy with chondroitinase not only encourages the sprouting of injured axons, but also imparts significant protection to nerve cells," neuroscientist Mark Tuszynski at the University of California, San Diego, who was not involved in this study, said in a statement. "These are new and important findings that could lead to the development of testable therapies for spinal cord injury in people."

A key note of caution: "There is far more research to be carried out before this sort of treatment could ever be considered for any form of clinical testing," study author Nicholas James, a neuroscientist at King's College London, told Live Science.

One criticism of the research will be that the researchers used a virus that integrates genes into the genomes of cells, which has the potential to cause problems such as cancer. James noted their collaborators are working on gene therapy techniques that do not involve viruses integrating genes into target cells.

James and his colleagues detailed their findings April 2 in the Journal of Neuroscience.