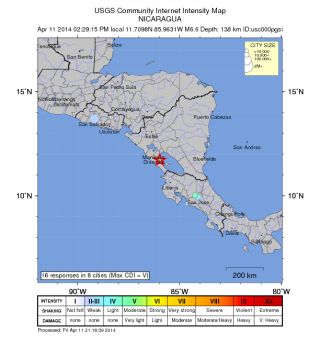 The magnitude-6.6 quake's epicenter was about 15 miles (24 kilometers) south of Granada. The earthquake originated 86 miles (139 km) deep, much deeper than yesterday's damaging temblor, the USGS reports. The quake was felt widely, including in El Salvador and Costa Rica.

More than 250 people were injured during Thursday's earthquake and one woman died of a heart attack, according to SINAPRED, the national disaster management agency.

There were no immediate reports of new injuries or damage from today's earthquake, the Associated Press reported. The earthquake did not trigger a tsunami, according to the Pacific Tsunami Warning Center.

Earthquakes of this size can cause significant damage, especially with poorly built structures. Even well designed buildings can be damaged or, in some cases, destroyed depending on the severity of the quake and a building's proximity to the epicenter. Earthquakes of this size are sometimes followed by significant aftershocks. But the damage caused by any single event depends on the quake's depth, proximity to populated areas, building standards in the region, as well as the type of earthquake. The USGS frequently updates the magnitude of an event after more data is analyzed.