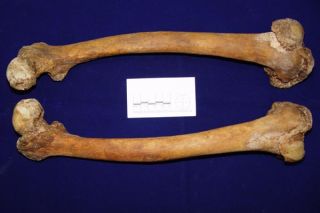 Human bones can serve as a historical record of their owners' lifestyles, and now ancient human skeletons from Central Europe may reveal how humans shifted from rugged nomads to plow-pushers, researchers say.

Leg bones of people living in the Danube River valley became weaker after 5,300 B.C., around the time when agriculture emerged in Europe, a new study suggests. The decline was most noticeable in men's bones, but both sexes lost bone strength.

The bones show "it was initially men who were performing the majority of high-mobility tasks, probably associated with tending crops and livestock," study researcher Alison Macintosh, an anthropologist at Cambridge University in England, said in a statement.

But with the rise of technological innovation, tasks became less strenuous and people became less mobile, so leg bones got weaker, said Macintosh, who will present her findings at a meeting of the American Association of Physical Anthropologists in Calgary, Alberta, this week. [Top 10 Mysteries of the First Humans]

From nomads to farmers

Human bones are malleable, and grow stronger or weaker depending on how much physical activity— such as long-distance walking or running — they experience. Bones tend to bulk up in areas that undergo the most strain.

In the study, Macintosh examined skeletons from cemeteries in what are now Germany, Hungary, Austria, the Czech Republic and Serbia. The skeletons' origin dates ranged from around 5,300 B.C. to A.D. 850.

Macintosh analyzed the skeletons' lower limb bones after scanning them with a portable 3D laser scanner. She found that men's shinbones became less rigid over time, and changes in both men's and women's bones suggest they began walking less.

The transition to an agricultural society was paralleled by a rise in technological innovation, the production of complex metal goods and an expansion of trade networks. These changes likely allowed more division of labor by sex and socioeconomic class, with people specializing in metalworking, pottery, crop production and raising livestock, Macintosh said.

After comparing the results of the new study with previous studies of bone density and activity of Cambridge University undergraduates, Macintosh found that men who lived in 5,300 B.C. were about as active as the university's current cross-country runners. In comparison, men who lived a little about 2,300 years ago were only as active as more sedentary university students, the researchers found.

The ancient women's bones also showed some weakening over time. The trends weren't consistent but could reflect the fact that women also generally started taking on more varied tasks that were less taxing on their lower limbs, Macintosh said.

Female skeletons experienced major changes in bone structure from the Bronze Age into the Iron Age (about 1450 B.C. to 850 B.C.), the researchers said, possibly because the Iron Age specimens included Hungarian Scythians, a group whose women likely performed heavy physical labor and combat.

However, the bone changes don't appear in the shins. This finding suggests the changes in Iron Age women weren't due to an increase in walking but rather a possible change in their body size or genetics, the researchers said.