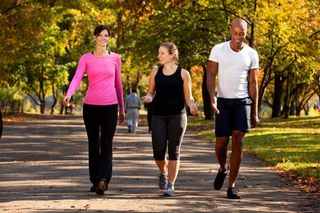 Obesity rates in the United States are still increasing, and have reached nearly 60 percent for women in some counties. But the good news is that physical activity is on the rise too, according to a new study of counties across the nation.

The study found the percentage of people in the United States who get enough exercise increased from 2001 to 2009, with counties in Kentucky, Florida, Georgia and California seeing the largest gains. The biggest increase for men was in Concho County, Texas, with about 58 percent of men being active in 2009, up from 41 percent in 2001. For women, the biggest increase was in Morgan County, Ky., with 44 percent of women being active in 2009, up from 26 percent in 2001. In 2011, the U.S. county with the highest percentage of men who did sufficient physical activity was Teton County, Wyo., with 77.5 percent, while the county with the lowest was Owsley County, Ky., where 33.1 percent of men got enough exercise. For women's physical activity rates in 2011, Routt County, Colo., had the highest (74.7 percent), and Issaquena County, Miss., had the lowest (28.4 percent).

The researchers considered 150 minutes of moderate activity, or 75 minutes of intense activity per week, as sufficient. All of the study's data on people's physical activity levels and body mass indexes were self-reported.

The findings suggest the rise in physical activity levels will have a positive impact on Americans' health, but will not be enough to curb the obesity epidemic, the researchers said.

The U.S. obesity rate has been rising for the past 20 years. More than one-third of American adults, and approximately 17 percent of children and adolescents, are obese, according to Centers for Disease Control and Prevention.

Obesity and low levels of physical inactivity are associated with health problems such as Type 2 diabetes and heart disease, which can result in early death and increased medical care costs. To create policies to address these issues, local governments need to know their areas' trends in obesity and physical activity rates, because the trends vary widely across states and counties, the researchers said.

In 2011, the highest obesity rate for men was in Owsley County, Ky., where about 47 percent of men were obese. For women, the highest rate was in Issaquena County, Miss., where 60 percent of women are obese.

The study found that in most counties, more men than women were getting enough exercise, but the increases between 2001 and 2009 were greater in women than men.

The study was published today (July 10) in the journal Population Health Metrics.