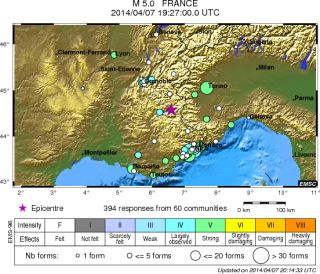 The USGS automated earthquake detection network calculated a preliminary magnitude of 4.7 for the temblor.

There were no immediate reports of damage, according to Reuters.

Earthquakes in southern France primarily result from the ongoing collision between the African and European tectonic plates. The plates are crashing together at a rate of 0.2 inches (5 millimeters) per year.