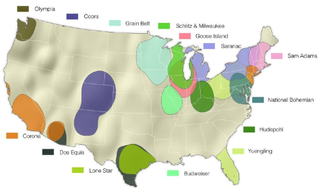 A map of "cheap" beers as discussed in thousands of geo-tagged tweets on Twitter.
(Image: © Matthew Zook, "The Geography of Beer" (Springer, 2014))

California and the Northeast love wine, Colorado and the Midwest quaff beer, according to new maps of American alcohol preferences as filtered through Twitter.

Using geotagged tweets from between June 2012 and May 2013, geographers mapped U.S. preferences for wine versus beer, as well as for beer brands. When reaching for light beer, Easterners are likely to reach for a Bud Light, while many Westerners opt for Coors Light, they found.

The maps and the findings appear as a chapter in the new book "The Geography of Beer" (Springer, 2014) and arose from the research blog floatingsheep.org, said chapter co-author Matthew Zook, a geographer at the University of Kentucky. [See Which US States Like Certain Beer Brands (Infographic)]

"The whole point of the Floating Sheep blog is just to play around, to do different things and silly things that might not make sense in an academic setting," Zook told Live Science.

Zook and his colleagues collected tweets from the 48 contiguous U.S. states. First, they compared tweets about wine versus beer across the country. Unsurprisingly, a higher proportion of wine tweets come from Washington, Oregon and Northern and Central California — wine country.

Wine references on Twitter were also concentrated in the Northeast Corridor from southern New Hampshire across much of New York state down to Washington, D.C. Tweeters talked about beer and wine approximately equally in North and South Carolina, with wine making a resurgence in Florida.

Beer was more popular than wine in a swath of the country starting in western Pennsylvania extending down the border between North Carolina and Tennessee. This beer-loving region extends west through eastern Kansas and Oklahoma, with the exception of the Memphis metro area, which leans toward wine. There was not enough data across most of the Great Plains region and West to differentiate preferences, though Coloradans are more likely to tweet about beer than wine.

Next, the researchers looked at some specific beer categories. They started with light beers, because these lower-calorie beverages are so popular. The tweet data showed Bud Light dominates most of the eastern half of the country. Coors Light makes a strong showing in Colorado, California and western Oklahoma. Busch Light is the light beer of choice in Iowa and a small region stretching past its borders, while the Midwest chooses Miller Lite.

Next, Zook and his colleagues turned their sights to "cheap" beers, loosely defined as affordable brews, both domestic and imported.

"It was just, I don't know if I should call it nostalgia for my misspent youth," Zook told Live Science.

They found that cheap beers clustered around their breweries of origin: Sam Adams in New England and Chicago's Goose Island around the Great Lakes. Lone Star dominated southeast Texas, and people in Southern California loved their Corona. Upstate New York and Michigan tweeted about Saranac, and Colorado and New Mexico remained loyal to Coors.

Twitter users aren't a representative sample of Americans, Zook said, but the findings are exciting, because they show that what people talk about on Twitter tracks historical and cultural patterns you'd expect in real-world behavior, such as Coloradans favoring the Coors brewed in their state. Similar work could be done looking at the distribution of small craft brews, he said.

"This is really where it gets really exciting, when you start comparing what kinds of things are being tweeted in a particular place versus what's being tweeted in another place," Zook said. "There's where you start getting some interesting differences in attention or cultural preoccupation."