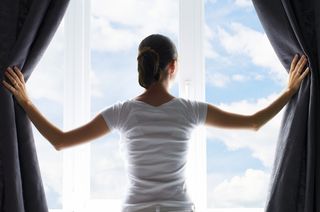 Being exposed to enough bright light early in the day may help you maintain your weight, according to a new study.

In the study, participants who were normally exposed to at least 500 lux of light (about the brightest level you'd find in homes and offices) starting at 8 a.m. had lower body mass indexes (BMIs) than those who usually got that much light exposure later in the day, the researchers found.

On average, for every hour that passed after 8 a.m. before a person was exposed to 500 lux, his or her BMI increased by 1.28 BMI unit, which translates to about 5 to 10 lbs., depending on a person's height, according to the study published today (April 2) in the journal PLOS ONE.

"Getting more light in the day was associated with a lower BMI," said study author Dr. Phyllis Zee, a professor of neurology at the Northwestern University Feinberg School of Medicine in Chicago.

"It is not just the amount of light that you get; it is really when in the day you get the majority of your light exposure" that seems to help regulate weight, Zee told Live Science. [Lose Weight Smartly: 7 Little-Known Tricks that Shave Pounds]

"We can say that this [exposure to light] is an independent predictor of body mass index," Zee said.

The researchers said they don't know for sure why exposure to light at particular times of the day is associated with BMI. However, it may have something to do with the interaction between light and the production of melatonin, a hormone activated during sleep that affects people's metabolism, Zee said. Light exposure also may help people get synchronized with their natural inner clock that also affects when they want to eat, she said.

Previous research has shown that exposure to light later in the day is associated with weighing more, and that people who go to bed later consume more calories and tend to eat more junk food, Zee said, adding that people who are sleep-deprived are prone to obesity.

There are steps everyone can take to maximize the potential benefit of early exposure to light in weight management, Zee said.

"We should try consciously to be exposed to light, particularly during the day, and it is not just the matter of how bright it is, but it is also very important how long," she said.

"Even indoors, if you can increase the amount of light in your office during the daytime to be about 200 to 250 lux, or 500 lux intermittently, that may signal to your brain: 'This is daytime; this is activity time,' and may actually improve your metabolism," Zee said.

"Employers may want to just think about improving the indoor lighting conditions, which could translate into better health for their workers," she said.

Zee said that further research should be conducted to determine the potential role of light as "one of these additional tools to combat obesity in our country."