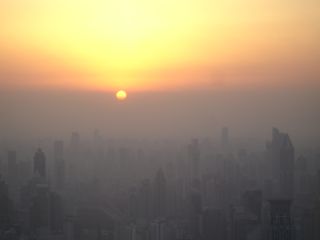 Shanghai before sunset in February 2008, seen from the Jin Mao tower observation deck. The sun has not yet dropped below the horizon; it has simply reached the smog line.
(Image: © Wikimediacommons/Suicup.)

Air pollution exposure contributes to one in eight deaths around the globe, according to estimates released Tuesday (March 25) by the World Health Organization.

Respiratory ailments have long been linked to air pollution, but dirty air also has more insidious effects on health.

Air pollution isn't just a threat in major cities like Beijing, where thick layers of smog can sometimes be seen from space. Cooking over coal, wood and biomass stoves can create indoor air pollution, which was implicated in 4.3 million deaths in 2012, according to WHO data. This type of pollution disproportionately affects poor women and children. [In Photos: The World's Most Polluted Places]

"Poor women and children pay a heavy price from indoor air pollution since they spend more time at home breathing in smoke and soot from leaky coal and wood cook stoves," Dr. Flavia Bustreo, WHO assistant director-general for family, women and children’s health, said in a statement.

"The risks from air pollution are now far greater than previously thought or understood, particularly for heart disease and strokes," Dr. Maria Neira, director of WHO's department for public health, environmental and social determinants of health. "Few risks have a greater impact on global health today than air pollution; the evidence signals the need for concerted action to clean up the air we all breathe."

The report drew from 2012 WHO mortality data and new estimates of air pollution exposure levels based on satellite data and ground-level monitoring measurements.