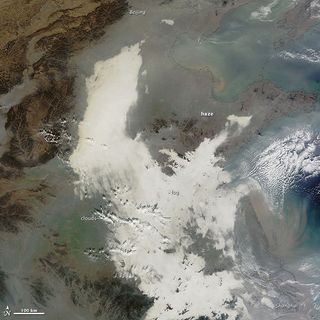 A heavy layer of smog hovering over China was captured by NASA's Terra satellite on Dec. 7, 2013.
(Image: © NASA)

China's latest spell of severe pollution can be seen from space.

NASA's Terra satellite captured this image of the thick smog lingering over China, from Beijing to Shanghai, on Dec. 7. The haze is shown in gray, while the white areas represent clouds and fog, according to NASA's Earth Observatory. At the time, the Air Quality Index had climbed to 487 in Beijing and 404 in Shanghai. The scale goes up to 500, but levels above 300 are considered dangerous.

Smog is the result of sunlight reacting with nitrogen oxides and volatile organic compounds that are emitted from fossil fuel burning (in sources like cars, power plants and factories) and agricultural burning. These reactions create tiny airborne particles that can be hazardous to human health.

In Shanghai, the haze grounded airplanes, sidelined construction projects, kept government vehicles off the road and forced schools to close, the Associated Press reported. The conditions even caused a ban on fireworks and sporting events. In Beijing, concentrations of small particles that are harmful to human health rose to levels nearly 20 times higher than those deemed safe by the World Health Organization. [In Photos: The World's 10 Most Polluted Places]

This is hardly the first time that pollution in China has been bad enough to be spied from space. An intense smog blanketed Harbin, in northeastern China, back in October, limiting visibility to less than 10 meters (about 30 feet). At the time, Terra's sister satellite Aqua captured images of the polluted air over the city of 11 million. That haze was the result of cold weather and smoke: The cold spell meant lots of people were turning up their coal-powered heating systems; meanwhile, as it was the end of harvest season, farmers were burning tons of agricultural waste and crop stubble throughout the countryside, resulting in a blanket of smog and smoke over Harbin.

In fact, smog is such a problem in some areas of China that aviation officials may soon make it mandatory for pilots flying into China's busiest airport, Beijing Capital International Airport, to master landing in low-visibility conditions, according to CBS News. The initiative aims to quell the airport's high percentage of flight delays that are worsened by heavy smog.

The Earth-watching satellites Terra and Aqua that have captured stunning images of the blankets of smog were launched into space in 1999 and 2002, respectively, with the goal of studying our planet's climate. The Dec. 7 natural-color image was taken using Terra's Moderate Resolution Imaging Spectroradiometer, or MODIS. Aqua is also equipped with its own MODIS and, together, these instruments capture images of the entirety of Earth's surface every one to two days, according to NASA.