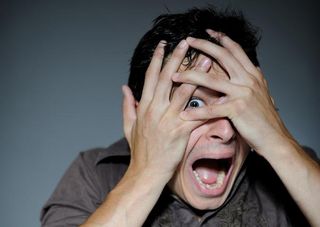 People who must undergo biopsies, or some types of CT or MRI scans, may find this medical treatment nerve-racking. Aside from the discomfort of being poked and prodded, there's the stress of being diagnosed or treated for a serious disease.

But video glasses, like Google Glass, can help calm these patients down, according to a new study.

People in the study were undergoing tests for serious problems, and it's standard for doctors to give such patients a strong sedative or relaxant, said study researcher Dr. David Waldman, professor and chair of the department of imaging sciences at the University of Rochester Medical Center in Rochester, N.Y. [10 Weird and Terrifying Medical Instruments from the Past]

The study focused on what's known as interventional radiology – using CT, ultrasound or MRI technology to guide inserting devices into the body, such as balloons to expand blood vessels, or catheters to break up dangerous blood clots. "We're putting needles in people," Waldman said. "The pain, not really knowing what's coming next, the anxiety level is much greater than ordinary CT or MRI."

In recent years, physicians have explored using fewer drugs when calming patients, since these medicines, being one more factor to track, can complicate treatment.

The study divided 50 patients into two groups; half the patients received a pair of glasses that could show videos, while the other half got no glasses. As the procedures began, the first group was allowed to choose a video they might want to watch during the testing.

"We had National Geographic types of clips, stuff like 'March of the Penguins' — that one was popular — and Disney movies," Waldman said.

The researchers then asked the patients to fill out a 20-question survey that rated how anxious or stressed they felt, using a scoring system of 1 to 4 on each question. Patients took the anxiety test both before and after their treatments.

The glasses didn't interfere with the work the doctor had to do, the researchers said.

While the results are promising, the study needs to be repeated in larger groups of patients, the researchers said. And it remains unclear how effective the video glasses may be for patients undergoing different procedures. For example, some people in the study received injections into the neck, which many people find to be more stressful than other procedures.

Waldman noted the available videos included no violent films or mysteries, so those who relax with Alfred Hitchcock might not be as satisfied with the results. A lot of people requested sitcoms, Waldman added (they didn't have them).

The researchers will next study 500 patients at three hospitals. That's a large enough study population, Waldman says, to tease out which treatments produce more patient fear, and which patients the glasses may help most.