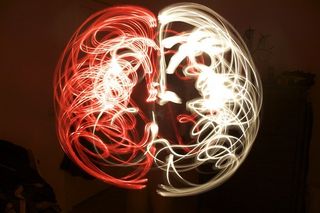 The golden age of brain research is upon us.
(Image: © kidpixo.)

Since the dawn of time, mankind has struggled to understand the human mind. We've come a long way since our ancestors viewed mental illness as demonic possession or witchcraft — and performed primitive craniotomies to cure head injuries.

Today, our society recognizes that mental illness affects one in four people. And these people are our friends, siblings, children and co-workers. The prevalence of conditions such as attention-deficit hyperactivity disorder (ADHD), depression, anxiety, post-traumatic stress disorder (PTSD), bipolar disorder, schizophrenia, obsessive-compulsive disorder and autism spectrum disorder is due, in part, to growing awareness and better diagnosis.

Most recently an influx of veterans suffering from PTSD, depression and dying by suicide has raised awareness and aroused sympathy for people with psychiatric disorders. However, the growing number of violent episodes, including shootings at schools, movie theaters, malls and the workplace also — rightly or wrongly — calls attention to issues surrounding mental health and reinforces lingering stigmas surrounding issues of mental illness.

Decades after the Community Mental Health Act deinstitutionalized mentally ill patients, the Treatment Advocacy Center reported the number of public psychiatric beds fell from 340 per 100,000 people in 1955 to just 17 per 100,000 in 2005—a decline of 95 percent. There is still a lack of proper support in communities. Many people, unfortunately, do not have access to, or receive, proper treatment for these illnesses. The nation faces a growing shortage of psychiatrists, psychologists, social workers and hospital beds. Tragically, the nation's prison system has become a de facto caretaker for many people with mental illness; there are currently more people with psychiatric illnesses in jail than in psychiatric hospitals.

In fact, the care and treatment of people with mental illness is one of the great civil-rights issues of our time. Many people with psychiatric illnesses go untreated due to continuing discrimination. Often due to lack of understanding that psychiatric illnesses are biological in nature, just as cancer and heart disease are, prejudice remains pervasive and impedes progress.

However, there are many reasons for optimism. More help is available for people suffering from mental illness than ever before. Scientists are making great strides in basic research, new technology, next generation therapies and early intervention techniques.

Last year, at Stanford University, researchers developed CLARITY, which stands for Clear Lipid-exchanged Acrylamide-hybridized Rigid Imaging/Immunostaining/In situ hybridization-compatible Tissue-hYdrogel. It's a new imaging technology that provides high-resolution, 3D images of the brain and offers the capacity to gain unprecedented insights into brain structure and function ― the big picture and the fine detail ― and could shed light on the underlying causes of psychiatric disorders. [Organs Made Transparent with New Imaging Technique]

This is the kind of cutting-edge research that offers the best hope for change. In the past year, Columbia University researchers discovered that elevated activities in one of the brain's neurotransmitters could be an early warning sign of psychosis in people at high risk of developing schizophrenia, while scientists at Harvard were able to reverse schizophrenia-like symptoms in mice. These discoveries are paving the way for effective early intervention, and even prevention and cures for mental illness.

Scientists are also identifying biological causes of depression and new targets for treatment. For example, researchers at the Washington University School of Medicine in St. Louis were able to identify specific brain activity linked with depression in at-risk children.

These are just some examples of breakthroughs realized by researchers funded by the Brain & Behavior Research Foundation during this period of remarkable advancement in brain research.

President Obama's BRAIN Initiative has also emphasized the importance of research and served as a call to action for many organizations. Ironically, the amount of federal funding for scientific research has lost 25 percent of its purchasing power in the past decade. That means there is less funding from places like the U.S. National Institutes of Health for young scientists and a lack of incentive for young people who wish to pursue careers in research. The United States is losing ground to countries such as Israel, South Korea and China that are making serious financial commitments to nurture the next generation of scientists.

Because of the steady decline in federal funding, private funding is essential for cutting-edge research that changes lives and can end the suffering that psychiatric illnesses bring so many.

In the realm of brain research , we have entered an era of tremendous possibility for understanding the brain and curing mental illness. For this great potential to be realized, a substantial collaborative effort, a willingness to fund innovative research ideas and a drive to support scientists at every stage of their careers are required. Taking these steps will ensure that our nation truly ushers in a golden age of brain research.

Since 1987, The Brain & Behavior Research Foundation has awarded over $300 million in NARSAD Research Grants to more than 3,700 scientists for cutting-edge research to understand, treat, and ultimately prevent and cure mental illness. The views expressed are those of the author and do not necessarily reflect the views of the publisher. This version of the article was originally published on Live Science.