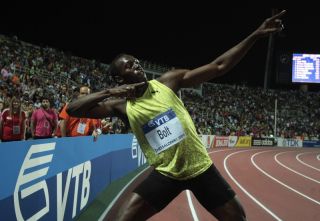 Humans would be able to take flight off the surface of Saturn's moon Titan simply by running in a wingsuit — but only if they were as fast as sprinter Usain Bolt, a group of physics students say.

Of all the celestial bodies in our solar system, Titan most closely resembles Earth, with stable liquid on its surface and a dense, nitrogen-rich atmosphere. But its lakes are made of methane, it maintains chilly temperatures of minus 288 degrees Fahrenheit (minus 178 degrees Celsius), and the planet has lower gravity and a stronger surface pressure compared with Earth.

Hannah Lerman, a 21-year-old student at the University of Leicester in the United Kingdom, said in a statement that she had seen a lot of claims online that humans might be able to get aloft above Titan if only they could run across the alien terrain with wings strapped onto their arms. She wanted to put this idea to the test. [Why Usain Bolt Is So Fast (Video)]

Lerman and two classmates factored in the density of air at the surface of Titan, gravity, and the ratio of the path of the air above the wing to that below the wing. The students calculated that a person would need to run at a speed of 36 feet per second (11 meters per second) if they wanted to take flight wearing a normal-sized wingsuit with an area of about 15 square feet (1.4 square meters).

That running speed is quite daunting considering that Jamaican sprinter Usain Bolt, the fastest man on Earth, achieves speeds only slightly higher (just over 40 feet per second, or 12 m/s).

To lift off by running at a more manageable speed of about 20 feet per second (6 m/s), a person would need to wear a more unwieldy wingsuit with a surface area more than three times larger than the normal size, the students said.

Their paper was published in the University of Leicester's Journal of Physics Special Topics, which features short articles written by students to help get them acquainted with the peer-review process.

Many of the papers test bizarre or pop culture-inspired scenarios, such as an article published last year that examined what traveling through hyperspace would really look like. (Apparently a centralized bright glow would be more accurate than the streaks of starlight featured in "Star Trek" and "Star Wars.")

Another student-written article from last year found that Spider-Man would really be able to stop a runaway train with his web, provided that the Spidey silk were as strong as silk spun by Darwin's bark spiders.